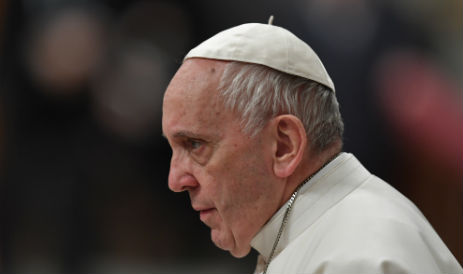 Alfie Evans, who is 22 months old, has a rare degenerative neurological condition which has not been definitively diagnosed.

His parents, Tom Evans and Kate James, have fought a legal battle to stop the Alder Hey Children's Hospital in Liverpool, northwest England, from turning off his ventilator — which would quickly end his life.

“It is my sincere hope that everything necessary may be done in order to continue compassionately accompanying little Alfie Evans, and that the deep suffering of his parents may be heard,” Pope Francis said Wednesday on Twitter.

“I am praying for Alfie, for his family and for all who are involved.”

The toddler's parents have seemingly reached the end of their legal options.

A High Court decision in February that doctors can stop treating the toddler, against the wishes of his parents, has been upheld in the Court of Appeal and then in the Supreme Court — the ultimate court in Britain.

Evans' parents wanted the European Court of Human Rights to examine issues surrounding the case, but ECHR judges rejected their bid, finding their application inadmissible, and with no apparent human rights violations.

The boy has been hospitalised continuously since December 2016, suffering from chronic seizures.

More than 125,000 people have joined a Facebook group supporting the campaign to keep him alive.

The case has echoes of that of Charlie Gard, who was born in August 2016 with a rare form of mitochondrial disease that causes progressive muscle weakness, including in his organs.

The British boy died on July 29th, one week short of his first birthday, after doctors withdrew life support treatment.

Gard's parents fought a five-month legal battle for him to be taken to the United States for experimental treatment.

They lost a series of appeals in British courts and the ECHR.

His case drew sympathy from many including US President Donald Trump and Pope Francis, while 350,000 people signed a petition demanding he be allowed to go to the United States.

The case triggered debate about whether parents or the state should have a final say on a child's wellbeing and whether a child's fate should be settled in a courtroom.