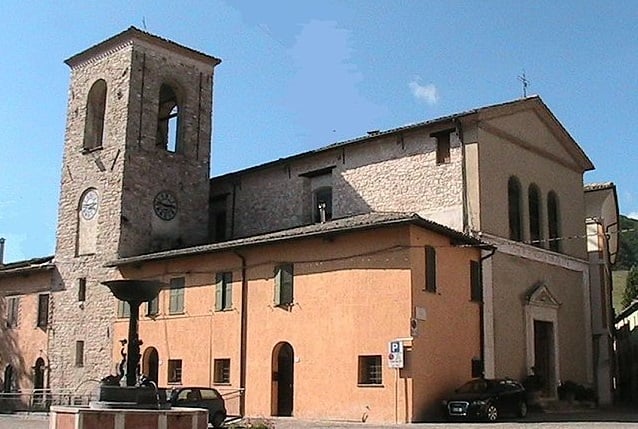 A church in Muccia, pictured before the quake. Photo: Casalmaggiore Provincia/CC BY-SA 4.0

The first tremor was felt at 5:11 am, according to Italy's National Institute of Geophysics and Volcanology (INGV), which downgraded the magnitude to 4.6 after initially reporting it as 4.7.

Its epicentre was located around 2 kilometres from the small town of Muccia in the Marche region, with the impact felt several kilometres away, with reports in Macerata, Ancona, Pesaro, Umbria, Lazio, including in the capital Rome.

No injuries had been reported as of 9 am, however there was some damage to local buildings.

The mayor of Pieve Torina, also located close to the epicentre, said there had been “considerable further damage” in his town during a radio interview. The town closed schools for the day and evacuated four families from damaged buildings.

A church bell tower dating back to the 17th century reportedly collapsed in Muccia, a town of around 1,000 residents. Italy's Civil Protection Department was at work on Tuesday morning in the affected towns to check for any further damage to homes or other buildings.

Parts of the local railway were also temporarily closed on Tuesday while workers checked the railway line.

More than ten aftershocks have followed the initial quake, including two with a magnitude of 3.5, registered at 5.46 and 6.03 am.

The map below, provided by INGV, shows the areas affected by Tuesday's tremors. Muccia is in the central Marche region which was hit by a deadly earthquake in August 2016 and sustained further damage, though no more casualties, from a second series of tremors — the most powerful to strike the country in decades — two months later.

The area affected on Tuesday morning was “activated at the end of October 2016, between October 26th and, when some of the strongest seismic events occurred in the sequence”, according to the experts at Ingv, who said the quake was probably directly linked to those which took place in 2016.

Those destructive tremors have been followed by thousands of aftershocks, causing concern for local residents, many of whom are still living in temporary accommodation after their homes were destroyed or left unsafe. Tuesday's largest tremor was still at a magnitude 500 times lesser than the most serious earthquake in October 2016.

The photo below was shared by a Muccia resident living in temporary emergency accommodation after the previous quakes, which however could apparently not withstand the morning's tremors.

More than half of the town's residents are currently housed in emergency accommodation (SAE), with only around 125 locals living in homes considered habitable before Tuesday's tremors.

“This new episode is proof that the emergency is not over,” said the governor of Marche, Luca Ceriscioli.

According to INGV's assessment, it is “fairly likely” that more tremors will follow.

READ ALSO: A village rebuilt after a deadly earthquake has been named Italy's most beautiful