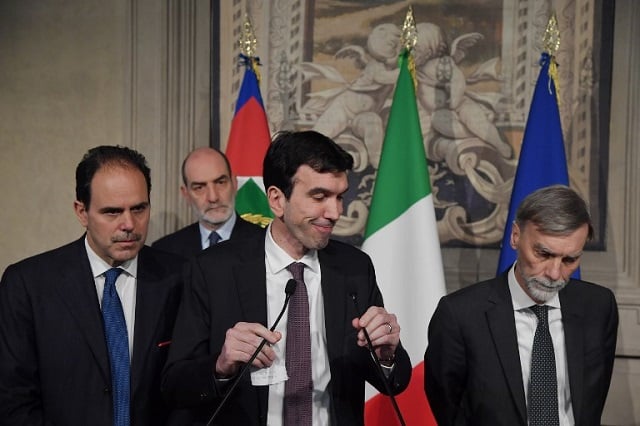 Boys' club? The Democratic Party's secretary and heads of its parliamentary group in the two houses of parliament. Photo: Tiziana Fabi/AFP

“It's time to move from promises to action,” wrote PD senator Francesca Puglisi in the 'TowandaDem' petition, which has been signed by 460 women in the party.

She noted that in the previous legislation, the PD had the highest level of female representation in parliament, but was overtaken after the March 4th vote by both the Five Star Movement and parties on the right wing.

“We thought [the issue of female representation] was sorted. A fatal political error that we'll never repeat,” Puglisi wrote.

“The crisis of identity in the Democratic Party and the Party of European Socialists comes from the difficulty in representing society's needs and above all the weakest segments of society, which inevitably turn to populist promises,” the appeal continues.

“We have lost the battle against inequality. We haven't been able to create a vision of society people can believe and hope in.”

Puglisi and the other PD women have called on the party leadership to allow them to be “protagonists” in “the necessary founding phase of the party”, and for equal representation at every level of the PD.

The writers claim that “in the Democratic Party, an increasingly closed and quiet leadership group is hiding behind delegations and talks made up only of men”.

“In parliament, deputies and senators have worked tirelessly to advance rights and freedom for women,” Puglisi continued, using the female form of both profession.

The accusations come as Italy's PD, along with many other major European centre-left parties, is suffering an identity crisis that has led to fractures and splits.

These internal rifts came to the fore under former prime minister Matteo Renzi, who was seen by many as trying to change too much too fast with his planned sweeping reforms. Crucially, he tried to do this before amassing enough support within his own party.

At the start of 2017, a group of left-wing rebels left the party to form their own, the Progressive and Democratic Movement (DP), and called for “a left-wing renewal”.

Together with the Italian Left, formed in February last year, and Possible, a small leftwing party founded in 2015, the rebels formed the Free and Equal alliance, which just surpassed three percent of the vote in March's election — well below the predictions of opinion polls.

It's not just the left-wing groups that are male-dominated: all four of Italy's major political parties are currently led by men, and both houses of parliament are made up mainly of white men (the country elected its first ever black Senator in the March vote) middle-aged or older.

Two women led parties which ran in this year's election, but Emma Bonino's More Europe party failed to enter parliament, and Giorgia Meloni's Brothers of Italy was the junior ally in a three-way centre-right alliance with the League and Forza Italia.