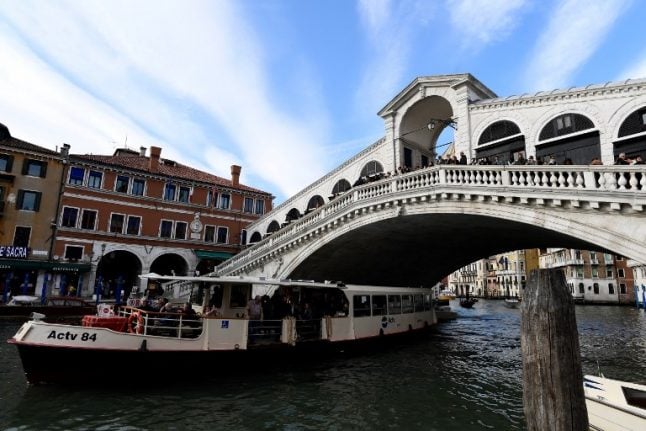 The warming weather signals the start of what local newspapers wearily call “yob season” in the lagoon city, when cases of irresponsible behaviour spike in the packed historic centre.

It kicked off at the weekend, when tourists were filmed diving off the Ponte di Rialto in the early hours of Sunday.

In one video, shared on the Facebook page Venezia Non è Disneyland (“Venice isn't Disneyland'), onlookers can be heard screaming and cheering as loud music blasts.

Police were called to the scene but did not find the divers, according to Venezia Today. Police believe “a small group of young people of foreign nationality” were involved, the news site said.

Mayor Luigi Brugnaro threatened to take legal action to remove videos of the incident from the web, Ansa reported, fearing that they could inspire other people to follow suit.

“The more space we give to these people, the more it will become a battle to outdo each other,” he said on Monday. “We'll look at the conditions and take action against those sharing this material, obviously asking for damages.”

He called it “truly squalid to take advantage of such a delicate place and even more squalid to exploit it by spreading it”.

As well as potentially damaging one of Venice's most famous landmarks, the stunt – performed by many an overenthusiastic visitor over the years – can be extremely dangerous. In 2016 it put one New Zealand man in hospital, when he collided head-on with a water taxi.

Other tourists have been fined for bathing in the Grand Canal, which carries a €50 penalty. Yet many complain that the sum is too low and that police are rarely on hand to catch unruly tourists in the act.

Venice has long had an uneasy relationship with the tourist hordes that boost its economy, but crowd its streets and exasperate its locals.

Over 9.5 million people visited the city in 2017, an increase of eight percent on the year before, according to figures published last week.

Yet the total amount spent by foreign tourists increased by only 5.7 percent last year, implying a higher number of lower-value visitors. At the same time mass tourism has pushed up rents, forcing many families out of their hometown.

In recent years, frustrated Venetians have staged frequent protests against the overcrowding, and Mayor Brugnaro has made tackling overcrowding a priority.

He has introduced measures ranging from promoting the less-explored corners of the city to installing people-counters at the most popular sights and introducing 'locals first' policies on water buses. Last summer, the mayor's office banned both new tourist accommodation and fast food outlets (with an exception for artisanal gelato) within the historic centre.

Meanwhile Italy's transport ministry recently introduced restrictions on large cruise ships to keep them out of the historic centre.