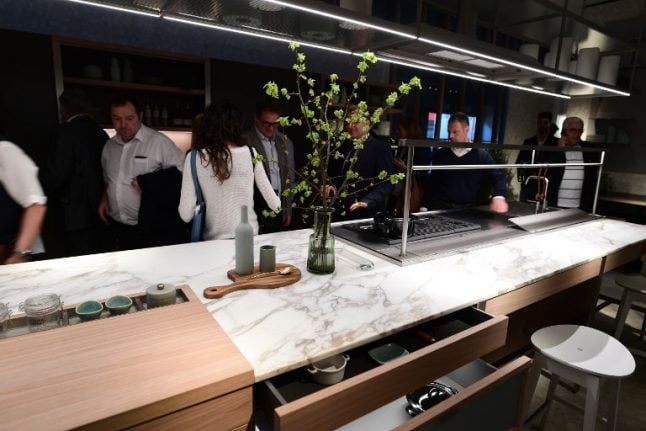 An Ernestomeda kitchen on display at the Salone del Mobile in Milan. Photo: Miguel Medina/AFP

As the six-day Salone del Mobile got under way in Italy's fashion capital on Tuesday, the country's kitchen design industry was celebrating a 3.2 percent growth in exports last year.

The event hosts more than 2,450 exhibitors, of whom nearly a quarter are foreign. Last year, it attracted around 300,000 visitors from 165 countries.

The €779 million generated by the kitchen sector is behind only Germany and China.

Consultancy firm Bain & Company estimates that the global design market grew four percent in 2017 to €35 billion, a figure that is destined to triple over the next ten years.

Milan's Centre for Industrial Studies (CSIL) says global kitchen exports are expected to reach $6.7 billion in 2021, an increase of about 20 percent from 2016.

And with the country slowly emerging from the global financial crisis, companies are capitalizing on Italy's reputation for style abroad to give themselves a place at the table.

“We realized [during the crisis] that it was time for us to focus on exports,” Paolo Zampieri, head of Zampieri Cucine, a small company that employs 34 people.

“The domestic market was once more than enough, but the purchasing power in our country has diminished and the competition is very strong.” The 'hot dog sofa', designed by by Studio Job for Seletti, on show in Milan. Photo: Miguel Medina/AFP

The crisis has sped up the concentration of the sector.

“Twenty years ago, there were 300 kitchen companies in Italy, today there are around 100. Six companies account for around half of production and 30 percent of exports,” CSIL research director Aurelio Volpe told AFP.

After being almost invisible abroad for the best part of a decade, exports account for 35 percent of Zampieri Cucine's sales.

The company is experiencing double-digit growth and others in the sector are benefitting from a more outward outlook.

“These companies have found a release valve in the export market. Even small businesses have found niches abroad,” says Volpe. Veneta Cucine is one of Italy's big six, and group controller Denise Archiutti says that the “companies that have managed to survive the crisis have become bigger, more productive and more technologically flexible”.

“Production logic has changed, with increasingly personalized products made to measure and at the moment of order,” she adds.

France is the industry's largest export market – as it is for the furniture sector as a whole – and where last year it saw a 10.7 percent increase in sales, followed by the United States and Switzerland.

Volpe notes that Italy is playing to a more refined market than number-one exporter China, which mostly sells low-cost kitchens to the United States.

Meanwhile Volpe says that Italian exports to China “have recorded an increase of 50 percent in a year.”