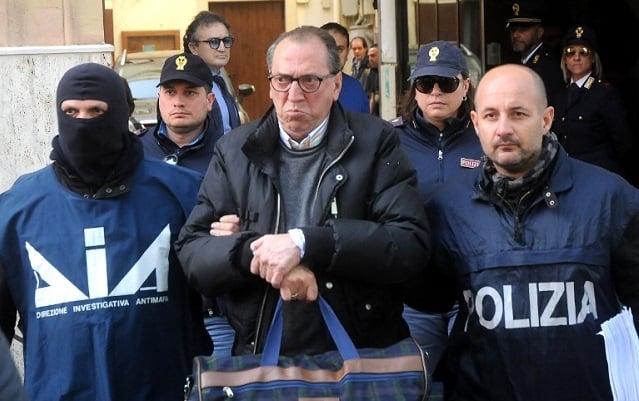 Twenty-one people were arrested in towns near the Sicilian city of Trapani where Denaro's criminal empire is based, as part of the “Year Zero” police investigation that allowed authorities to uncover a system of paper notes, or “pizzini”, that Denaro uses to give orders to his most faithful associates.

Those include brothers-in-law Gaspare Como and Rosario Allegra, both in custody, who allegedly manage their boss's most important affairs.

“The Trapani Mafia is (securely) in the hands of fugitive Matteo Messina Denaro and we can say that because its most important members are his own family,” said Pasquale Angelosanto, head of the Italian carabinieri's ROS special investigative unit. An identikit image of Matteo Messina Denaro, designed by the police in 2006. Photo: Polizia di Stato

Denaro, now 55, vanished in 1993, with the police seeking his arrest on a range of crimes including dozens of murders, and authorities say he has evaded justice by being more “mobile” than others on the run, who tend to hunker down in hideouts.

“It would be pointless to say we're closing in on him. He's a different type of fugitive to the other big targets, who've all been arrested, and that means locating his whereabouts is particularly hard,” said Palermo prosecutor Francesco Lo Voi.

Police also arrested a businessman involved in the online gambling industry, one of Denaro's suspected income sources. Police told reporters that despite reports of Cosa Nostra's decline, the Trapani branch was “particularly lively and active in control of the area” and operating in the longstanding Mafia industries of extorsion, property fraud and clinching public works contracts.

Police told AFP that the gang used people apparently above suspicion to take part in judicial auctions to buy seized assets cheaply and sell them on at a profit. They also confirmed the existence of a wiretapped recording of one of those arrested on Thursday praising the notorious January 1996 murder and dissolving in acid of 14-year-old Giuseppe Di Matteo.

The son of Mafia turncoat Santino was kidnapped in 1993 in a vain attempt to stop his father from collaborating with the authorities.

“Did he not do the right thing? He did the right thing!” news agency AGI reported the suspect as saying in the recording, apparently referring to the perpetrators.

“It's right that we don't touch kids … but why didn't you retract? You obviously didn't care about your kid.”

In another recording, Denaro and his deceased father Francesco, once a local boss, are compared to Padre Pio, a friar who died in 1968 and was subsequently sainted and is revered in Italy. One voice says the two mafiosi should have statues erected in their honour.

Denaro, a former trigger man who once reportedly boasted that he could “fill a cemetery” with his victims, is believed to have become the “boss of bosses” following the death of Salvatore “The Beast” Riina in November.

He is suspected to have been behind bombings in Rome, Milan and Florence in 1993 that killed 10 people just months after Cosa Nostra murdered anti-Mafia judges Giovanni Falcone and Paolo Borsellino in similar attacks.

In 2015, police discovered that he was communicating with his closest collaborators via the use of pizzini, which were being left under a rock at a farm in Sicily.

READ ALSO: Citrus fruits and Cosa Nostra: The origins of the Sicilian mafia