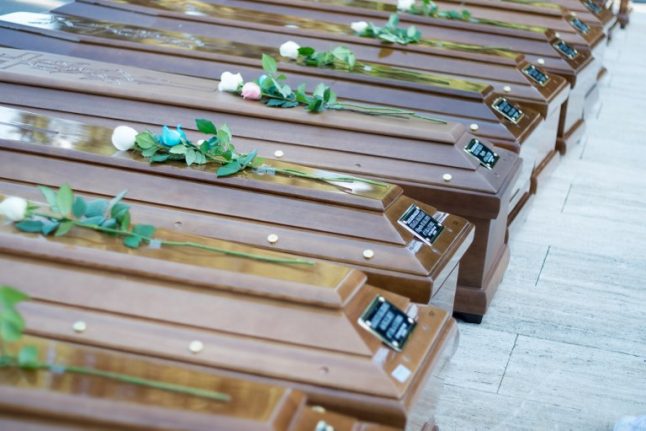 The coffins of 26 young women found dead in the Mediterranean and brought to Italy for burial in November 2017. Photo: Eliano Imperato/AFP

Italy, Greece, Malta and Cyprus – hardest hit by waves of migrants from Syria and Libya or people elsewhere in Africa – will gather on June 11th in Rome to discuss the plan, the International Commission on Missing Persons (ICMP) said on Wednesday.

“If we succeed in launching this initiative, and it looks very good that we will, it will be historical,” ICMP director general Kathryne Bomberger said in The Hague, where the inter-governmental organization is based.

Amid the biggest migrant crisis to hit Europe since World War II, Italy alone has recovered some 8,000 bodies from Mediterranean waters over the last decade, the ICMP said.

The cooperation between states will help to properly quantify the numbers of missing and dead, track survivors and locate bodies, Bomberger said.

Southern Mediterranean countries like Libya and Egypt are also to be invited as observers to the talks, she added.

Since the beginning of the year, almost 18,000 migrants arrived in Europe by sea, according to the International Organization for Migration.

Some 559 people were already reported dead or missing, the IOM added.

“There are so many discussions today about the data, discussions that I think are rather negative… but the data also have positive endings,” Bomberger said at a meeting with foreign correspondents.

The ICMP was born out of the conflicts in the former Yugoslavia and set up in 1996 in Sarajevo by then US president Bill Clinton. Using increasingly sophisticated DNA research methods, it has already succeeded in identifying some 70 percent of the 40,000 people who went missing in the Balkans conflicts of the 1990s, including 90 percent of the 8,000 killed in the 1995 Srebrenica massacre.

Over the past years it has increasingly lent its expertise to other tragedies, such as the 2004 Indian Ocean tsunami, or the devastating Hurricane Haiyan which hit the Philippines in November 2013.