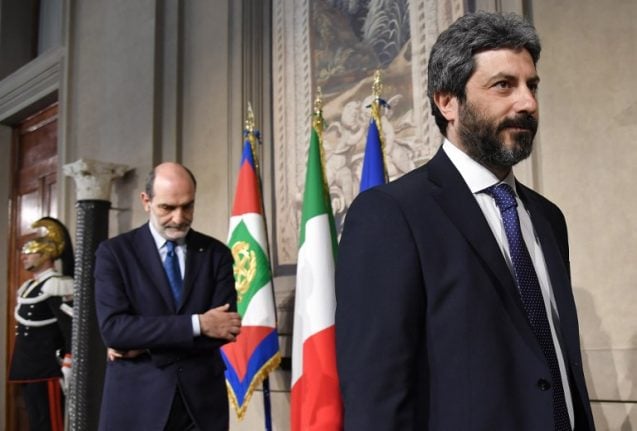 On Monday, Italian President Sergio Mattarella tasked speaker of the lower house Roberto Fico with seeing if a Five Star Movement (M5S)/Democratic Party (PD) government could be formed after talks between the M5S and a rightwing coalition led by the nationalist League party failed.

Fico has until Thursday to report back to the president.

Progress appeared possible after M5S leader Luigi Di Maio slammed the door  on Matteo Salvini's League, which is partnered with Silvio Berlusconi's Forza  Italia and minor far-right party Brothers of Italy, and said that he would sit down with the PD if they were willing to negotiate over a programme for government.

The talks between the the M5S and the League collapsed after Salvini refused Di Maio's demand that the League dump Berlusconi and come to the negotiating table alone.

“For 50 days we've tried in every way to invite the League to sign a government contract but they've decided to consign themselves to irrelevancy,” Di Maio said after meeting Fico on Tuesday afternoon.

“I ask the PD come to the table to see if there is the basis [for a government] … either a government is formed or we go back to the polls.” The PD had previously refused to countenance being “a crutch” to an M5S government.

Earlier Tuesday, interim PD leader Maurizio Martina said he would consider negotiating with the M5S, should they confirm that their talks with the far-right League were definitively closed.

The PD has refused to partner Di Maio's M5S up to now due to the fierce attacks it has been subject to from the M5S since it first entered parliament in 2013.

It led a coalition that came third in last month's election with around 23 percent of the vote but has enough seats in both the lower and upper houses to form a majority with the M5S, which is Italy's largest single party after picking up 33 percent.

However, the majority it would form would be razor thin, and the significant policy differences between the two parties make forming a government tricky and will complicate any subsequent legislation.

READ MORE: The Local's full coverage of the Italian election