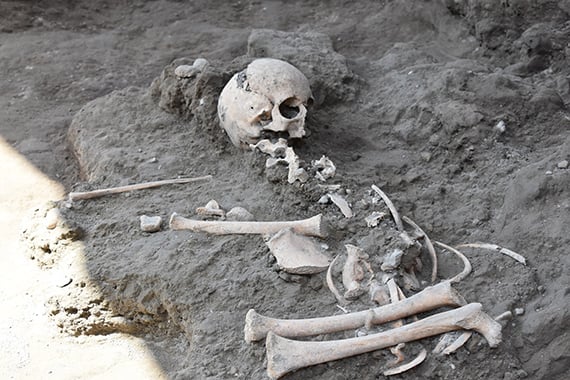 The skeleton of a child found in the Central Baths at Pompeii. Photo: Parco Archeologico di Pompei

The child, aged around seven or eight when she or he died, was found in the city's central bathhouse, where researchers believe the youngster hid to take shelter from the eruption of Mount Vesuvius.

While the building protected them from the ash and fragments of lava that rained down on the city, they would have been suffocated by poisonous fumes and eventually buried under a layer of hot gas and volcanic matter that swept in through the windows.

The discovery came as a surprise, since the central baths were thought to have been fully excavated long ago.

Experts were preparing to clean an entryway to the bathhouse when they checked the area with a videoscope, a type of inspection camera that allows them to inspect hidden or inaccessible places. Noticing something unusual, they began digging – and just 10 centimetres below the surface they found the tiny skull, followed by the rest of the bones.

Massimo Osanna, director general of the archaeological site, said in a statement that it was one of the “exceptional discoveries that produce strong emotions”.

The skeleton has since been taken to the site's research laboratory, where it will be examined for more clues about who the child was and how they lived and died.

An interdisciplinary team of specialists equipped with cutting-edge technology is working tirelessly, Osanna said, “so as not to leave any scientific element to chance, and to reconstruct as accurately as possible a new piece of history that excavations have given back to us”.