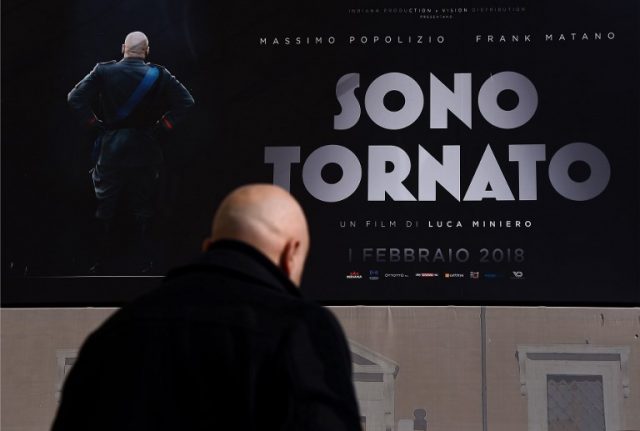 A poster for the film 'I'm Back', which imagines Mussolini returning to modern-day Italy. Photo: Filippo Monteforte/AFP

The Il Duce piñata appeared in one of the city's central squares on Wednesday, April 25th, the day on which Italy celebrates its liberation from fascism with a national holiday.

Pictures showed the dummy, dressed in uniform and giving the fascist salute, hung upside down – as the real-life dictator was when Italian partisans executed him in 1945 and displayed his body in a square in Milan.

According to a local news site, the stunt was organized by an antifascist collective and a gym that also serves as a leftwing community centre. Children were given a stick and told to hit the dummy to get at the candies inside, Picchio News reports.

Once Il Duce's head fell off, according to the site, the piñata was replaced with another depicting a man dressed in black with a Celtic cross on his chest. It's presumed to represent Luca Traini, a man who shot six immigrants of African origin in February in what he claimed was revenge for the death of a local woman found dismembered days earlier, allegedly by a Nigerian national.

The mayor of Macerata said the piñatas had nothing to do with official Liberation Day celebrations and called the incident “an unacceptable provocation that betrays the true meaning of April 25th, stains antifascism itself and harms the city”.

The council has been in touch with Italy's special investigations police force to help identify those responsible, Mayor Romano Carancini added.

A senator for the centre-right Forza Italia party, Maurizio Gasparri, announced that he would raise the matter in parliament, while Mussolini's granddaughter Alessandra, who represents Forza Italia in the European Parliament, said that she would visit Macerata on Friday.

– “It's right to celebrate April 25th, it's awful to incite violence.”

Meanwhile neofascist party CasaPound called the incident a “revolting display” and accused antifascists of “stoking a climate of hatred” in Italy.

Italy's relationship with its fascist past is complicated, to say the least. Unlike in Germany, where the country's wartime leaders are overwhelmingly reviled and Nazi symbols a taboo, Mussolini's birthplace continues to attract admiring pilgrims, Il Duce trinkets are a common sight in souvenir shops and even mainstream Italian politicians have been known to publicly express admiration for the dictator.

While Italy last year moved to ban “fascist propaganda” – including Mussolini-themed memorabilia – small but vocal neofascist parties like CasaPound and Forza Nuova, each of which unsuccessfully fielded parliamentary candidates in last month's election, keep the ideology and iconography of the Fascist Party present in the public view.

Both parties had campaign rallies interrupted by protesters in the run-up to the vote, with several antifascist demonstrations ending in violence and arrests.

In Macerata, where far-right and leftwing groups held a string of rival protests in the wake of Traini's attack, support for the nativist, anti-immigration League party shot up from less than 1 percent to more than 20 in the March 4th election. Traini, who has a neo-Nazi tattoo and kept a copy of Mein Kampf at home, had previously stood for the League in local elections, in which he received zero votes.

The leader of League, Matteo Salvini, recently appeared on posters in Pavia in northern Italy that show him hanging head down in another apparent reference to Mussolini's fate, according to local reports. The image also features US President Donald Trump and other world leaders in the same pose, with the English tagline: “Make fascists swing again.”