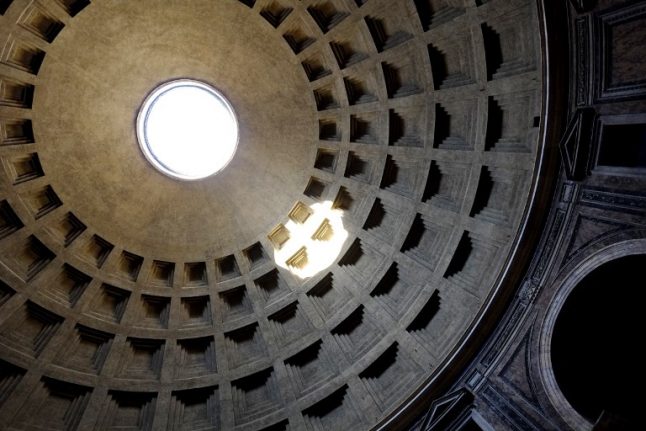 Inside the Pantheon. Photo: Andreas Solaro/AFP

With more than 7 million visitors per year, the Pantheon is one of Italy's most-viewed monuments.

Here are just some of the things that also make it one of the incredible.

1. Legend says it was where Rome's founder died

The legend goes that Romulus, the mythical founder and first king of Rome, died on the spot where the Pantheon now stands. He was supposedly grasped by an eagle and flown to heaven, giving the site sacred associations with the city's history and its gods.

2. There was an even older one

The Pantheon you see today is not the first structure on that site. The original temple was built as around 25 BC by Roman consul Marcus Agrippa, whose name you can still make out on the façade. Archaeologists now believe his version was destroyed and rebuilt, possibly more than once. The building as it stands is generally attributed to Emperor Hadrian, who is thought to have had it redesigned and completed nearly 1,900 years ago.

3. Its dome is bigger than St Peter's

The Pantheon's age is all the more remarkable when you consider what astonishing skill went into creating its curved roof. You might not think so at first glance, but its dome is wide than the one atop St Peter's Basilica by almost two metres (though St Peter's rises higher).

At 43.3 metres in diameter, the dome remains the world's largest unreinforced concrete structure of its kind to this day. Its ancient architects cleverly lightened the weight of the roof, starting with thick travertine bulked up by bricks, then thinner terracotta tiles followed by lightweight tufa and pumice at the top. At the highest point, the oculus – the nine-metre-wide circular hole in the roof – actually saves crucial weight at the dome's most vulnerable point.

It's also exactly as high as it is wide, meaning that the interior of the Pantheon perfectly fits a 43.3m-diameter sphere. 4. No, it doesn't flood when it rains

You think the Romans built a dome that big and didn't remember to put in a drainage system?

Take a closer look at the paved floor: some of the slabs have small holes running through them, which allow any rainwater to drain through to sewers below.

What's more, when the Pantheon was filled with lit candles as it's believed would have been during its past, the flames produced an upwards current of warm air that would cause falling rain to evaporate before reaching the floor.

5. Parts of it came from Egypt

The 16 granite columns that support the portico travelled thousands of kilometres to get there. They were quarried in Egypt, in the mountains near the Red Sea, then dragged to the Nile, sailed up the river, across the Mediterranean, and along the Tiber before finally being pulled into place.

For context: each one weighs 60 tons. 6. And now, parts of it are elsewhere in Rome

While some of the external decoration was lost over the years, one part of the Pantheon was recycled: the bronze ceiling that once made the portico shine. The metal was stripped off on the orders of Pope Urban VIII in the 17th century and melted down to make cannon for the Castel Sant'Angelo, the papal fortress on the other side of the Tiber. Legend has it that some of the bronze also ended up in the sculpted canopy over the altar of St Peter's.

The travesty earned the pope, a member of the illustrious Barberini family, the epithet: “What the barbarians didn't do, the Barberinis did.”

7. It once had trees growing inside it

The Pantheon, like many of Rome's finest monuments, fell into disrepair with the fall of the Roman Empire. Historians believe that, as the ground level around it rose, dirt accumulated on the floor of the Pantheon, clogged the drainage system and turned the building into a wasteland. Watered by the rain that dripped through the oculus, weeds, vines and even trees put down roots in there – and it's possible that homeless Romans camped out inside, too. 8. It has another alias

Trying asking a taxi driver to take you to “Santa Maria della Rotunda” and see where you end up. That's how the Pantheon became known after it was cleaned up and turned into a Christian church, on the pope's request and with permission from the Byzantine emperor, in 609.

They gave it a Latin name: Sancta Maria ad Martyres, or Saint Mary and the Martyrs. But over the centuries, Italians came to call it more informally, “Saint Mary of the Rotunda”.

While Michelangelo said the Pantheon was so perfect it must have been designed by angels, not men, later architects felt compelled to make some changes. In the 17th century two ill-advised bell towers were added on either side of the portico, disrupting the building's classical outline and earning themselves the nickname “the ass's ears”.

They were lopped off by general consensus in the 1880s.

10. You can get married there

As you'd expect in a consecrated church, Catholic ceremonies are held there – including regular masses and not so regular weddings.

That's right, it is possible to get married inside the Pantheon and a handful of couples do it every year. Many, many more take the easier option and just get their wedding shots taken outside. 11. It's the resting place of many famous people, and one who's not famous at all

The Pantheon houses the tombs of one queen, two kings and nine artists, architects and musicians. But there's one much less famous grave: it belongs to Maria Antonietta Di Bibbiena, who was engaged to the master painter Raphael.

The young noblewoman died before they were married and is buried to the right of her fiancée, who lies in what is arguably the building's finest tomb.

12. Once a year, rose petals rain through the roof

The Pantheon celebrates Pentecost, the day the Holy Spirit descended on the Apostles, with a spectacular ritual in which firefighters pour a shower of rose petals through the oculus. The red symbolizes the blood that Jesus Christ shed to save humankind.

The ceremony is free of charge and open to all, but places are limited so arrive early and be prepared to queue. Or you can just watch the live stream online. If you're lucky enough to be inside the Pantheon on April 21st, around noon, look towards the entrance: you'll see the sunlight that enters through the oculus hitting the door dead on.

April 21st is the date of the founding of Rome and historians suspect that the Pantheon may have been designed to give the emperor some gloriously symbolic backlighting as he entered the temple to celebrate the anniversary.