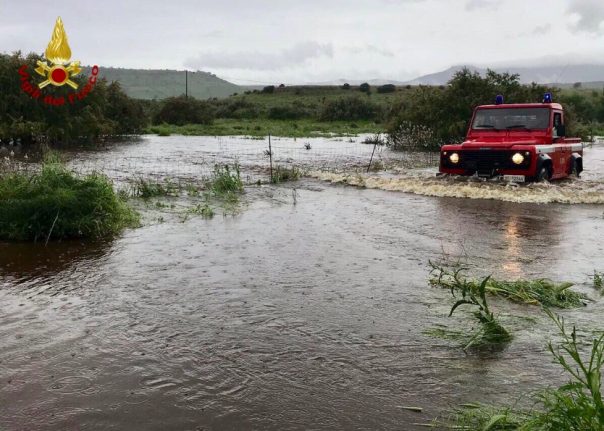 The Civil Protection Department issued a maximum red alert in three regions – Campidano di Oristano and Tirso near the central-west coast and Gallura in the north-east – until midnight on Thursday, while the rest of the island remains on orange alert.

Parts of Sardinia have had more than four times the rainfall they would usually expect in May in the first two days of the month alone, according to figures from regional environmental protection agency Arpas.

Siniscola in the north-east saw 164 millimetres, compared to a monthly average of 36 mm and a yearly one of 666 mm. Nearby San Teodoro and Posada had 134 and 133 mm respectively, while the island's capital, Cagliari, had 68 mm of its annual 441 mm.

The downpours left many areas flooded, especially in the north and west of the island, where landslides were also reported. Several mayors ordered schools and public parks closed for safety, and stretches of the island's state highways were blocked off for hours at a time. Firefighters in Oristano said they were called out more than 50 times on Wednesday alone as cars skidded or became stuck, buildings flooded and trees toppled. Ancient Roman baths in Fordongianus were reported flooded and further south, part of a hospital's ceiling collapsed. Rescuers were also sent to retrieve a group of 14 shepherds who found themselves cut off in the remote north-east.

Thankfully no fatal incidents have been reported, unlike in November 2013 when flash floods killed 18 people in Sardinia.

The storms are forecast to continue until at least Saturday. The island is also expecting winds of up to 100 kilometres an hour and strong waves around its coastline. Temperatures, meanwhile, have dropped some 20 degrees C from the early 30s of last weekend to around 12 midweek.

The bad weather will reach mainland Italy too: storms are predicted on Thursday and Friday in the north-west, especially Emilia-Romagna and Piedmont, as well as the central Adriatic coast and parts of the south. Parts of Abruzzo, Calabria and Sicily have issued orange alerts in anticipation of thunderstorms, high winds and even hail.

This image from the Epson Weather Centre shows an area of low pressure moving up the Tyrrhenian sea, bringing rainclouds with it.