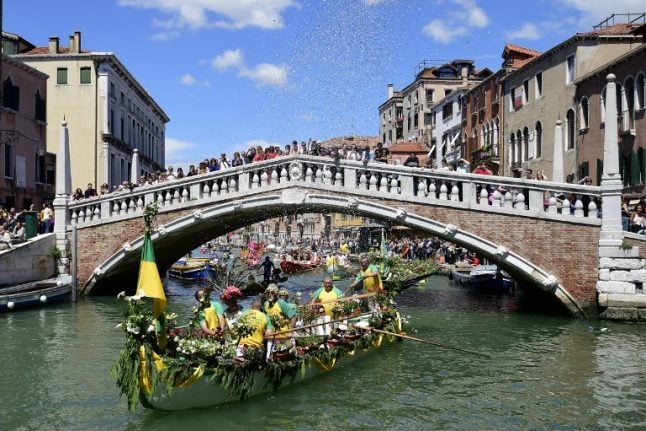 A flower-covered boat rowing in Venice, which hosts a regatta this month. Photo: Olivier Morin/AFP

May provides some prime opportunities to watch top-level live sport. The Serie A season is coming to a close as Italy's finest football teams play the final matches that decide who gets the scudetto.

They're well worth watching, in person or simply amid the ambiance of your neighbourhood bar. This year Napoli is putting up a valiant fight to wrest the title from Juventus. The title will be all but decided the first weekend, but play continues until May 20th: see the official website for details. Meanwhile some of the world's best tennis players will be picking up their rackets for the Italian Open in Rome.

This year's tournament takes place May 7-20th on the glorious outdoor clay courts of the Foro Italico, with tickets on sale now at a wide range of price points depending on court and round (you can watch the opening pre-qualifiers for less than the cost of a panino: just €3.30). The big-name attractions include Serena Williams, Novak Djokovic and Rafael Nadal. If you think two wheels beat two feet, you're in luck: May is the month of the Giro d'Italia.

This year the cycling race starts outside Europe for the first time in its history, but after stage 1-3 in Israel the tour lands in Sicily on May 8th. The rest of the race will cover the length and breadth of Italy, finishing in Rome on May 27th. It's free and very fun to watch in person: check the route information on the official website and be prepared to walk (or cycle!) to your chosen viewing spot well before the peloton gets there: roads are closed to vehicles hours in advance.

Each May the floating city celebrates its relationship with water with the Festa della Sensa.

Dating back centuries to the time when Venice was its own Republic, the festival traditionally saw the city's rulers cast a gold ring into the lagoon to celebrate the “marriage” between Venice and the sea. Today the mayor carries out the same ritual, which is accompanied by a regatta, rowing races, a market and concerts. This year's edition takes place on the weekend of May 12-13th; find the programme here. In fact, a host of traditional festivals take place across Italy in May: some others you might want to consider are the Sposalizio dell'Albero or 'wedding of the trees' in Vetralla, Lazio, in which the mayor “marries” two oak trees (May 8th); La Barabbata in Marta, on the shores of Lake Bolsena, when white buffalo pull carts in a procession honouring the town's traditional crafts (May 14th); or La Maggiolata in Lucignano, Tuscany, a parade of flower-covered floats celebrating the arrival of spring (May 20th, 22nd and 27th).

Spend a night at the museum(s)

If you like to linger over Italy's rich cultural heritage, the Notte dei Musei is the event for you: one Saturday in May, curators keep the galleries open past midnight and into the early hours.

This year it takes place on May 19th and state-owned museums across Italy will be participating (check their websites for details). Some organize special events or open buildings usually off-limits to the public, and many offer entry completely free of charge.

Rome's ancient Pantheon celebrates Pentecost, the day the Holy Spirit descended on the Apostles, with a spectacular ritual in which firefighters pour a shower of rose petals through the hole in the dome. The red symbolizes the blood that Jesus Christ shed to save humankind. This year the ceremony takes place after morning mass on Sunday, May 20th. It's free of charge and open to all, but places are limited so arrive early and be prepared to queue. Or you can just watch the live stream online.

The Palio di Ferrara claims to be the oldest event of its kind in the world. Since 1279, horseback riders representing eight of the city's wards have raced round the Piazza Ariostea to claim the prize of a “palio”, or cloth, dedicated to the patron saint of Ferrara, Saint George.

Traditional games and processions in historical costumes take place over several days in May, but the big event is on the last Sunday of the month (this year May 27th). For more information, click here.

Go back in time to an ancient Greek theatre

Built by ancient Greeks, the amphitheatre of Syracuse is returned to its original purpose once a year when it hosts its annual festival of classical theatre.

This year's edition runs from May 10th-July 8th and features three plays: Oedipus at Colonus by Sophocles, Euripides' Hercules, and The Knights by Aristophanes. May is the perfect time to go before the Sicilian nights get too sweltering.

Contemplate the future of technology

For a less traditional experience, head to Wired's Next Fest in Milan from May 25-27th. The tech magazine is laying on three days of talks and events in Montanelli park dedicated to innovation in every aspect of science, culture, business, politics and the economy.

Raise a glass (or four)

Ok, you might actually want to clear the calendar for the last weekend of May: it's the date of Italy's annual Cantine Aperte, when the country's winemakers throw open their doors – and their bottles – to the public.

Visitors are invited to visit the cellars, talk to the producers and naturally, sample the goods. Find out which wineries are participating in your region here. Cin cin!