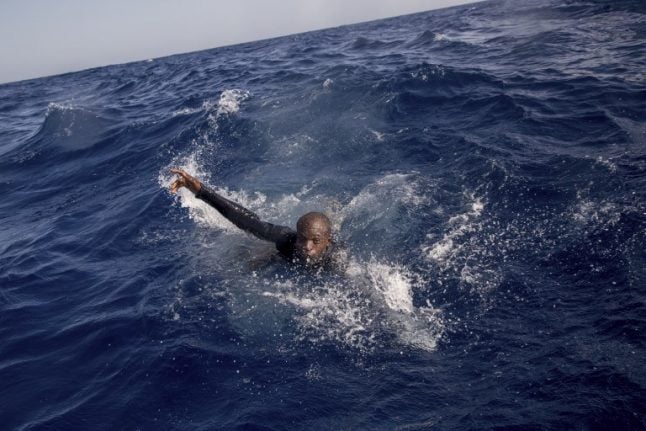 A man swims to an NGO boat during a rescue operation that's now the subject of a lawsuit. Photo: Alessio Paduano/AFP

Announced by human rights groups at a press conference on Tuesday, the case was brought by 17 Nigerians who accuse Italy of violating their human rights through what they call the “subcontracting” of migrant rescue operations to Libya.

Both countries struck a controversial deal in February 2017 aimed at stemming the flow of people trying to cross the Mediterranean in the hope of arriving in Europe.

Lawyers prosecuting the case say they want the court to order Italy to pay “moral reparations” and end the agreement, which it says violates international law, as was ruled in 2012 for a similar deal struck between former Italian prime minister Silvio Berlusconi and dictator Moamer Kadhafi in 2008.

The agreement has been hailed as a success in Italy thanks to an over 80 percent drop in arrivals so far in 2018 compared to the same period of last year, according to Interior Ministry figures.

However, the lawsuit argues that Italy was responsible both for the actions of the Libyan rescuers due to their fundamental help with logistics, and liable for the subsequent abuses in Libyan detention centres, which are well-documented.

Libya only has the capability to intercept migrant ships thanks to EU funding and support from both the Italian coast guard in Rome and an Italian Navy ship located off the coast of Tripoli. The Libyan coastguard pulls people aboard its boat during the disputed rescue operation. Photo: Alessio Paduano/AFP

The lawsuit was filed on Thursday and originates from a search-and-rescue operation on November 6th involving NGO Sea Watch which saw the German charity tussle with a Libyan coast guard vessel for the migrants.

Sea Watch estimates “at least” 20 people died and claims the Libyan coastguard “beat and threatened” survivors as they pulled them out of the sea and off a stricken dinghy, while some dived back into the sea in an effort to reach the Sea Watch boat.

Five bodies were recovered during the operation, which saw 59 people rescued and taken to Italy by Sea Watch and 47 returned to Libya.

Once the sea had been cleared of survivors the Libyans sped off with one person hanging off the side, prompting an Italian navy helicopter to move in to tell the Libyans to slow their vessel down. A man tries to escape from the Libyan boat. Photo: Alessio Paduano/AFP

The rights groups, including Sea Watch, told reporters that fifteen of the claimants were in Italy while the other two were back in Nigeria after spending time in a Libyan Department of Combatting Illegal Migration (DCIM) facility.

The two were given a choice between going home or staying in a DCIM centre, places which United Nations human rights chief Zeid Ra'ad al Hussein called “an outrage to humanity” after UN monitors visited the country in November.

The UN slammed conditions in the facilities, where they saw “emaciated and traumatized men, women and children piled on top of one another” and gathered eye-witness reports of people being beaten or jabbed with cattle prods if they ask for food or medicine.