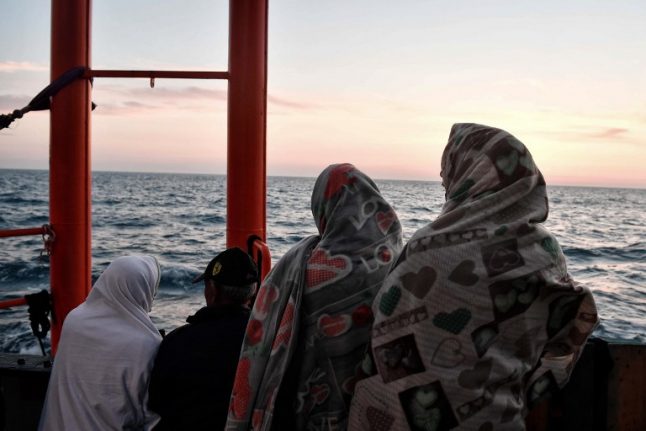 People onboard the Aquarius rescue boat that docked in Italy on Thursday. Photo: Louisa Gouliamaki/AFP

Rome decided this week to allow 105 people to land in Italy following a back-and-forth with British authorities over who should take them. Nearly 700,000 people have landed on Italian shores since 2013.

One of the group to arrive at Sicilian city Catania on Thursday, which included six women, 32 teenagers and six children, was Vitoria, a 21-year-old Nigerian who told AFP that she had been in Libya for just over a year before setting off over the weekend.

She said that she had spent nearly six months in dreadful conditions in a Libyan prison after a failed first crossing last year. The country's notorious detention centres have been blasted by human rights groups and the United Nations as “inhuman”.

“I was not afraid of the water, because God created the water. I'm not afraid of death. We all die one day. I'm more afraid if the Libyan police were to catch me again, because they are so wicked,” she said. Vitoria was one of those who had been on the Aquarius rescue ship, chartered by SOS Méditerranee and Medecins Sans Frontieres, since Monday night, after being saved on Sunday by a smaller boat – the Astral – run by a Spanish NGO following a call from the Italian coastguard.

The crew on the first boat had been told that Libya was coordinating the rescue operation, meaning that the migrants were to be taken back to the North African country.

However, when the Astral met the migrants on Sunday the Libyan coast guard were nowhere to be found and didn't respond to radio calls. At that point they decided to take them on board, and that's where the standoff began.

As it was not officially coordinating the rescue, Rome asked London to deal with the migrants as the Astral bears the Union flag. On Sunday night London asked the Astral to transfer them to the Aquarius, which flies the flag of
Gibraltar.

The two ships met Monday morning about 30 nautical miles off the coast of Tripoli, but waited all day for written confirmation of the transfer from either London or Rome.

In absence of a response from London – the British coast guard told AFP that the incident wasn't their responsibility – Rome authorized the transfer on Monday night, but waited until Tuesday night to give the go ahead for them to travel to Catania.