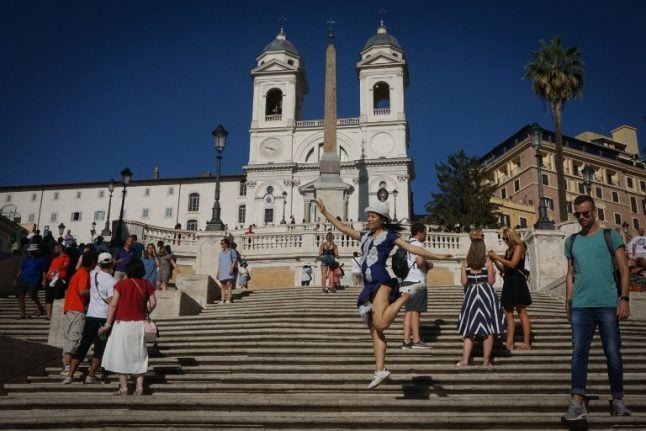 Tourists on the Spanish Steps in Rome. Photo: Marie-Laure Messana/AFP

Incoming visitors spent €39.1 billion in Italy last year, almost €3 billion more than in 2016, according to Banca d'Italia data presented by the International Centre for Studies on Tourism Economics (Ciset) this week at a conference on Italy's international tourism industry in Venice.

Factoring in the indirect and knock-on benefits, Ciset calculates that international tourists added €41.3 billion to the Italian economy, equivalent to boosting the GDP by 1.5 percent.

Rome, already Italy's biggest destination, was the chief beneficiary of the boom: the capital's tourist takings rose by 20.3 percent last year, to €6.74 billion. Italy's northern tourist hotspot, Venice, registered a 19.4 percent increase in spending, while Naples, gateway to many of the attractions of the south, saw a rise of 17.8 percent.

Milan and Florence, meanwhile, had spending drop by 2.4 and 6.3 percent respectively.

On average, Ciset said, foreign tourists spent €100 per head for each of the 6.3 days that they stayed, making each visitor worth around €629 to Italy.

Germans were the most valuable visitors, making up nearly 17 percent of Italy's total tourist revenues. Their spending increased by 14.7 percent in 2017, compared to a 6.9 percent boost for French tourists and a 4.5 percent increase for Brits.

US tourists, however, pinched their pennies: their spending dropped by 1.7 percent compared to the year prior – though even so they continue to be the second-biggest spenders in Italy after Germans.

Italy's cultural attractions were the main moneymaker, bringing in €15.5 billion, followed by beaches with €5.5 billion. Some of the fastest growing sectors, meanwhile, were ecotourism, food and wine tours and adventure travel. The majority of Italy's tourist revenues – 67 percent – are concentrated in just five regions, according to Ciset: Lombardy, Lazio, Veneto, Tuscany and, for the first time, the southern region of Campania. The south continues to make less money from tourists than the centre and north, despite visitors tending to stay longer there.

And many of Italy's most established tourist destinations suffer from overcrowding, especially in the peak summer season. The influx, however profitable, exacts a considerable cost on quality of life for locals and jeopardizes the survival of Italy's heritage, the key to its appeal.

One of the government's priorities is to promote smaller destinations and authentic craftsmanship, gastronomy and wine tourism as a way of evening out visitor numbers and revenues throughout the year, said Francesco Palumbo, national director of tourism at Italy's Ministry of Culture and Tourism.

“We don't need to attract more tourists,” he told Travel Quotidiano, “but we have to orientate ourselves towards quality tourism adapted to what Italy has to offer.”