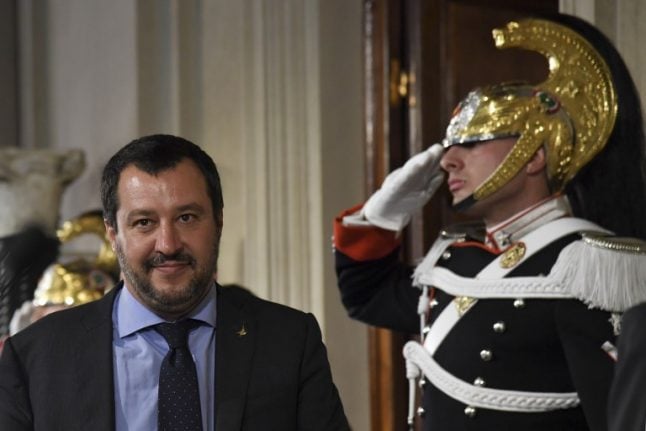 Matteo Salvini of the League leaves a meeting at the presidential palace. Photo: Andreas Solaro/AFP

The draft, obtained by Huffington Post Italia, is headed “Contract for the government of change” and presented for signature by Matteo Salvini of the nationalist League and the anti-establishment Five Star Movement's Luigi Di Maio, the two party leaders locked in negotiations to form a coalition government after March's election made them the two driving forces in Italian politics.

Neither has denied the authenticity of the document since it was published online on Tuesday night, though they issued a joint statement saying it was “an old version that has already been substantially modified”.

While the parties' statement specified that one of the most explosive proposals, an opt-out mechanism that would open the door to Italy leaving the European single currency, was no longer on the table, the document indicates that they were seriously considering it just two days earlier.

In further comments published on Facebook, they stated that they wished to return to an era before the Treaty of Maastricht, the 1992 contract that laid the foundations for the euro and bound member states to follow EU-wide financial rules.

Such rules, along with monetary policy, “must be reconsidered together with our European partners, in the spirit of returning to the pre-Maastricht setting when European states were motivated by genuine aims for peace, brotherhood, cooperation and solidarity,” the parties said.

Some of the proposals in their draft contract include:

Some parts of the document – mostly the sections on immigration, according to the HuffPost – are highlighted in yellow, indicating that they're the subject of disagreement.

Speaking before the draft was published, Salvini admitted that the League remained “far apart” from the M5S on certain points.

In a Facebook video, meanwhile, Di Maio had promised that an M5S-League government would be a “bomb” to Italy's political establishment.

“I see in a certain establishment such a fear of change,” he said. “If we get there it will be a bomb – but a bomb in the positive sense. With courage we will succeed in returning citizens their rights and returning Italy to her rightful place on the European stage.” Di Maio spoke true: his and Salvini's proposals are proving explosive, even in draft form.

They would clearly put Italy at odds with the European Union, disregarding its repeated warnings about Italy's debt load to embark on expensive reforms and ambitious spending on one hand and demanding concessions and generous contributions on the other.

One small thought: The only way to try to enact most of this programme is for #Italy to leave the eurozone and the EU. The League and the 5 Star Movement have just said they want to stay in the currency union. This makes most of this plan a complete non-starter.

Other commentators were puzzled by the mooted “reconciliation committee”, which some feared would be unconstitutional and others said was redundant.

“But is the shadow reconciliation committee a bit like a video assistant referee [in football]?”

While many believe the proposals are unfeasible, analysts said they could be enough to scare the markets.

“This leak will be an eye-opening experience for those who had a very complacent attitude towards a 5SM-League government,” wrote Lorenzo Codogno, chief economist at LC Marco Advisors Limited. “Although the two parties may eventually water down the proposals, the document reveals the true extent of their oddity, inexperience and off-track nature.

“The attitude of financial markets will not be the same from today onwards. The onus will be on these two parties to reassure and mainstream these proposals as quickly as possible, but it may now become an uphill struggle… In this situation, financial markets may take the prospect of early elections as a positive development.”

And the leak already seemed to be taking its toll as markets opened on Wednesday.

There was also speculation about who leaked the draft contract and why. While some assumed it must have been a whistleblower hoping to scupper the proposals, others suggested that it served the parties' own interests to publicize their anti-establishment, eurosceptic agenda with a view not to a coalition, but new elections.

The Lega-M5s programme just unveiled makes more sense if you abandon silly idea that all (even most) of it is meant to be implemented. In fact, it provides brilliant opportunity to engage in name calling & kick off new campaign, after evil EU Commission refuses to play ball.

It remains to be seen what effect the leaked contract will have on coalition talks between the League and M5S, which are ongoing after the parties requested “a few more days” from President Sergio Mattarella at the beginning of the week to attempt to iron out their remaining differences.

Speaking on Facebook on Wednesday, Salvini said that negotiations were making progress and suggested they could result in a deal before Thursday.