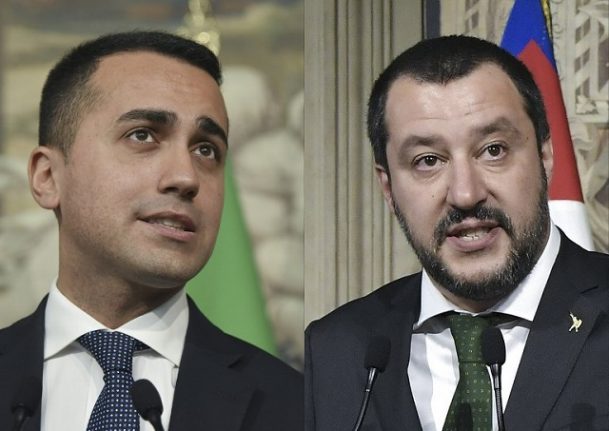 Di Maio said earlier in that all outstanding matters had been settled in talks with Matteo Salvini, the leader of the nationalist and eurosceptic League although the issue of their joint prime ministerial candidate was still being debated.

But speaking late on Thursday in northern Italy, he went further, saying: “I am very confident, we have created the basis of the government and the name of the prime minister will not be a problem.”

Salvini, meanwhile, pledged that on Monday the two parties would be in a position to formally present President Sergio Mattarella with the results of the talks.

“I am proud of the time, the days and nights spent, not talking of ministers but of the future of Italy,” he said as he travelled to northern Italy where regional elections will be held Sunday.

“On Monday we will go to Mr Mattarella and submit our work,” he added.

President Mattarella must agree to the parties' prime ministerial nominee before the candidate seeks the approval of parliament. The two parties have been locked in negotiations over a “Contract for the Government of Change”, a document setting out policies and how the proposed coalition would work.

“Can you see that I've hardly slept at all over the past days?,” tweeted Salvini earlier next to a smiling selfie. “I'm working for you and I promise to give it my all,” he wrote.

Di Maio said earlier on Thursday that the final version of the contract would be put to his party's members for approval “probably tomorrow”.

The government team is expected to take into account the number of seats each party holds after March's inconclusive elections. Five Star became Italy's largest party after gaining nearly 33 percent of the vote, while the League – shorn of the rest of the rightwing coalition that won 37 percent – will be the junior partner with 17 percent. Officials representing Mattarella have said he would only scrutinize the final version of the contract.

A version of the document, from Tuesday evening, was leaked to daily Il Fatto Quotidiano. That document contains a proposed “conciliation committee”, a structure parallel to the parliament which would be responsible for settling any disagreements between two political forces that have divergent ideas on issues like immigration and Italy's relations with Europe.

It proposes that European Union sanctions against Russia be dropped immediately, and includes a watered-down EU section that no longer talks about exiting the single currency but asks that unspecified “certain responsibilities” be repatriated to individual member states.

Domestically there are pension reforms, the introduction of a basic income and a section questioning ten obligatory vaccines for children attending state schools.

The leaked version also contained a number of issues that still needed signing off, including possibly reopening discussions about EU rules and monetary policy.

Among other policies yet to be approved as of Tuesday evening were also whether asylum centres should “fully respect” migrants' human rights, and the radical proposal to have just two tax brackets – 20 percent and 15 percent. Also yet to be signed off were a register of religious leaders, a demand that all religious sermons be conducted in Italian, and that local consultations take place before any new mosques are opened.

The likely arrival of a populist government took its toll on the Italian banking sector at the Milan Stock Exchange Thursday, in particular the Monte dei Paschi di Siena bank, majority-owned by the Italian state, which saw its share price tumble.

The troubled bank is undergoing heavy restructuring measures after benefiting from bailout worth billions of euros. But the M5S-League government draft outlined plans to “redefine the mission and the objectives” of the bank, without giving further details. As a result the bank's share prices tumbled more than 10 percent on Thursday afternoon and was down at 8.86 percent at close.

The gap between Italy's and Germany's 10-year borrowing rates has also increased by 25 base points since Tuesday to 156 – a sign that investors were still concerned about Italy's financial stability.

The Italian stock market closed at -0.29 percent after taking a 2.32 percent hit on Wednesday.

READ ALSO: What will Italy's next government mean for its mountain of debt?