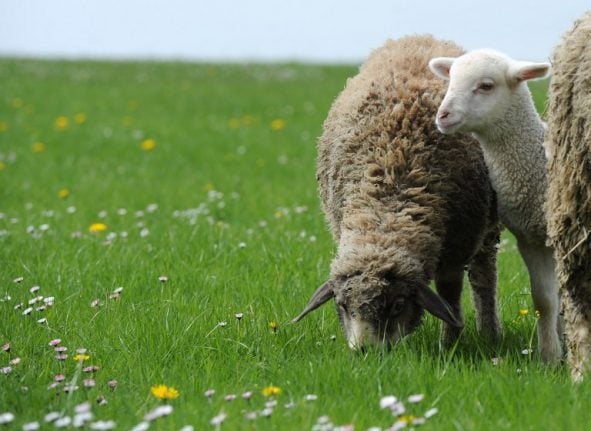 Mayor Virginia Raggi has encouraged the city council to look into the possibility of bringing animals to graze in the capital's public parks and gardens, the chair of the city council's environment environment committee, Pinuccia Montanari, said this week.

Sheep already keep the grass in check in Caffarella Park, a sprawling public reserve on the south-eastern outskirts of Rome, “and we would like to extend it to other parks and large gardens,” Montanari said on Facebook.

Cows could be deployed “when the grass is particularly high”, she later added in a radio interview, explaining that the city of Rome has flocks and herds at its disposal on its two publicly owned farms.

Critics of Raggi, a member of the upstart Five Star Movement that is poised to govern Italy for the first time ever, accused the mayor of seeking a (ahem) sheepskate solution to yet another of the daily problems – giant potholes, toppling trees, exploding buses, heaps of uncollected rubbish – that plague Rome.

Few would dispute that the capital's lawns are in urgent need of a good mow: with some 44 million square metres of green space and only a few hundred gardeners to maintain it, some of the city's most famous parks resemble a wilderness in spring and summer. Villa Doria Pamphili has lost whatever “landscaping” it once boasted, picnicking in Villa Ada is only for the adventurous and dogs quickly disappear into the thickets that cover the Villa Borghese.

And for weeks, Italian newspapers have been inviting their readers to send in their photos of the out-of-control flora – some of it over two metres high – that is “invading” Rome, rendering pavements impassable, cycle paths invisible and creating fire hazards.

“With a lack of resources and personnel, we looked for all the possible solutions,” said Montanari, who insisted that no animals would be let loose in the city but put to pasture in enclosed areas, and only after a full health check. Sheep at pasture on the outskirts of Cologne. Photo: Oliver Berg/DPA/AFP

While farmers' association Coldiretti welcomed the proposal, it met with ridicule from the mayor's opponents.

“Goodbye lawnmowers and gardeners, like they use in every other city around the world,” said Democratic Party councillor Enzo Foschi. “First seagulls came to take the place of rubbish collectors, now it's the sheep's turn. What's next: in summer will Raggi give us geckoes to get rid of mosquitos?”

Others had their own suggestions for creative deploying wildlife already resident in Rome. “Wild boar and pigs, which often roam the streets, could be used to get rid of garbage, while snakes could be a useful deterrent to control the proliferation of mice that have invaded the city,” commented Laura Corrotti, a regional councillor for the League.

She was being ironic, but her proposals weren't that far off a genuine suggestion made by a candidate in Rome's last mayoral election to import 500,000 cats from Asia and set them loose on the capital's rats. (Needless to say, he didn't win.) Nor is Raggi's idea particularly far-fetched: other European cities, including Paris and Cologne, have already experimented with putting sheep to graze in urban areas.

In Italy, one enterprising shepherd came to notoriety after herding his 600-strong flock around the country, allowing them to graze in public spaces as he went. The mayor of Ferrara even invited the sheep to trim the grass around the city's medieval walls, though other councils accused him of creating a health hazard.

At least the sheep and cows employed as Rome's lawnmowers would (presumably) enjoy themselves. A few years ago, the far more orderly Swedish capital of Stockholm caused outrage by burning the dead bodies of thousands of rabbits culled from its public parks to fuel a heating plant.

Credit for our headline goes to The Local's managing editor, Paul O'Mahony. Can you think of a less baaad pun? Send us your suggestions on Facebook, via Twitter or by email!