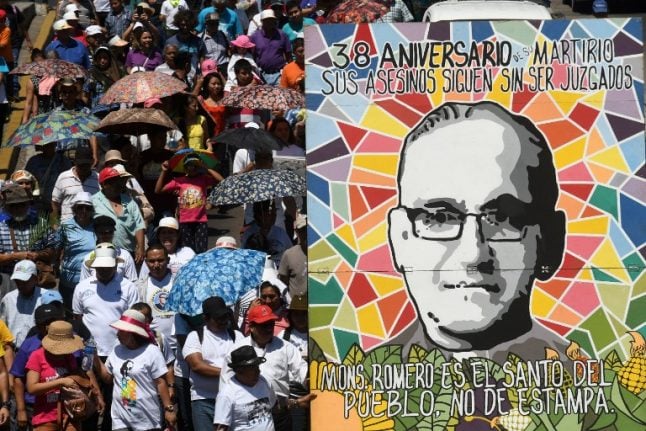 Catholics in San Salvador took part in a march commemorating the 38th anniversary of the assassination of Salvadorean Archbishop Oscar Arnulfo Romero in March. Photo: MARVIN RECINOS / AFP
Described as a simple man close to the poor, Romero stood up for peasant rights in the face of a right-wing backlash which painted him as a radical supporter of “liberation” theology in the small, impoverished central American nation.
His killing during a service in March 1980 shocked the world just at the start of a bloody civil war which claimed some 75,000 lives in the period 1980-92. Some three million people fled the country.
A United Nations probe concluded that Romero's murder was ordered by Roberto D'Aubuisson, then commander of the Nationalist Republican Alliance (ARENA).
There has been considerable opposition from the right to any special church recognition for Romero and his work but Francis — the first Latin American pope — beatified him as a “martyr” in 2015 to popular acclaim.
Beatification is the first step in a long process towards sainthood and involves recognising a person's special achievements. They are canonised — made saints — when the church concludes that they worked miracles of faith.
Francis has previously expressed his admiration for Romero — otherwise widely seen as a conservative prelate — saying that he had been “defamed” and his name “dragged through the mud” by other clergy in Latin American who claimed he was at heart a Marxist troublemaker.
Pope Paul VI (1962-1980) pushed through what is known as the Vatican II reform programme launched by his predecessor Pope Jean XXIII to modernise the church in a fast changing world. He was beatified in late 2014.
Pope Francis has already canonised popes Jean XXIII and John Paul II.