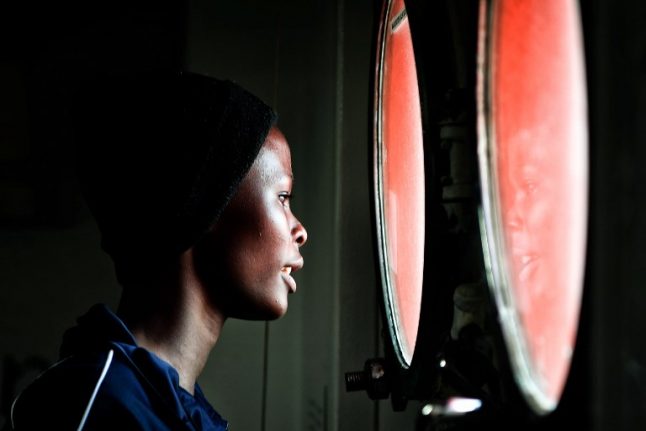 A woman aboard a rescue boat arrives in Messina, Sicily. Photo: Louisa Gouliamaki/AFP

With a coalition of the anti-system Five Star Movement (M5S) and the nationalist League party in power, the prospects for migrants reaching Italy after a hazardous sea crossing from Libya look even dimmer.

The previous centre-left government already all but closed the maritime border following controversial accords signed with the Libyan government as well as local authorities, including armed groups, in an effort to curb the migrant influx.

Since the start of this year, Italy's interior ministry has tallied 7,100 arrivals via Libya and 3,500 more via Tunisia, Algeria or Greece. According to the UN migration agency IOM, the Libyans have themselves intercepted 6,500 people seeking to reach the southernmost tip of Europe.

Now the new, populist government has signalled it will push EU partners to shore up the bloc's external frontiers and accept an automatic and more equitable shareout of migrants across the continent. It also wants to speed up asylum procedures and repatriate those rejected and those from countries deemed “safe”.

To help fund the process the government would reallocate some of the budget – in 2017, €4.2 billion used in rescues, providing sanitary assistance and running reception centres. Arrivals down 'but not suffering'

Arrivals of migrants to Italy slowed by some 80 percent from July 2016 to July 2017 after Marco Minniti, a veteran secret services coordinator who became interior minister in December 2016, reached an accord with Tripoli to keep migrants in detention centres on Libyan soil.

Human rights groups and the United Nations have blasted most of the centres for their “inhuman” conditions.

The arrivals have fallen also due to a key change in procedure. Whereas previously the Italian coast guard coordinated rescue operations from Rome, operational authority now largely resides with Tripoli.

For the migrants, the difference is critical. Coordination by Rome means they are taken to Italy whereas Tripoli taking charge means they again are left at the mercy of a system stalked by violence and extortion as well as poor conditions.

“The arrivals have gone down but not the suffering,” says Carlotta Sami, spokesperson for the UN High Commissioner for Refugees.

Migrants concur. “I was not afraid of the water, because God created the water. I'm not afraid of death. We all die one day. I'm more afraid if the Libyan police were to catch me again, because they are so wicked,” said Vitoria, a 21-year-old Nigerian who arrived in Sicily earlier this month after spending months, she told AFP, in terrible conditions in Libya.

She was taken aboard The Aquarius, a ship chartered by SOS Mediterranee and Doctors without Borders (MSF), after she was first picked up by a smaller boat run by a Spanish NGO following a call from the Italian coastguard.

The crew on the first boat had been told Libya was coordinating the rescue, but the North African country's coastguard did not appear. After a three-day delay, Italy eventually accepted their transfer.

Non-governmental organizations are hamstrung by Tripoli telling vessels to keep their distance – even in cases where the Libyans cannot intervene themselves owing to distance or lack of resources.

“This puts us in impossible situations,” says Ruben Neugebauer, spokesman for German NGO Sea-Watch. “If we obey, we are violating the obligation to rescue. If we do not obey, we risk not being able to bring the migrants to Italy or see our vessel seized by Italian authorities.”

'More dangerous than ever'

Recent weeks have also seen the Italians force NGO vessels from rescue zones for days at a time, a tactic which SOS Mediterranee director Frederic Penard says means that “the priority is no longer rescue effectiveness”.

“Crossings are today more dangerous than ever,” says IOM Mediterranean region director Federico Soda. His organization has registered 383 dead or disappeared off Libya so far this year – 2.8 percent of known departures, up from 2.2 percent in previous years.

Italy's new government hopes to pull from its sleeve another card, one which Minniti has already tried – in vain – to play. It would see Italy simply refuse to take in migrants picked up by European, military or humanitarian rescue vessels.

The populist MS5 and the hard right League hope to send home as quickly as possible the bulk of new arrivals by speeding asylum procedures and systematically kicking out those whose claims are rejected, as well as an estimated 500,000 illegal immigrants.

But at the current rate – just 6,514 official expulsions in 2017 amid opposition from countries of origin to take back their nationals – the process could take more than 75 years, Italian media say.