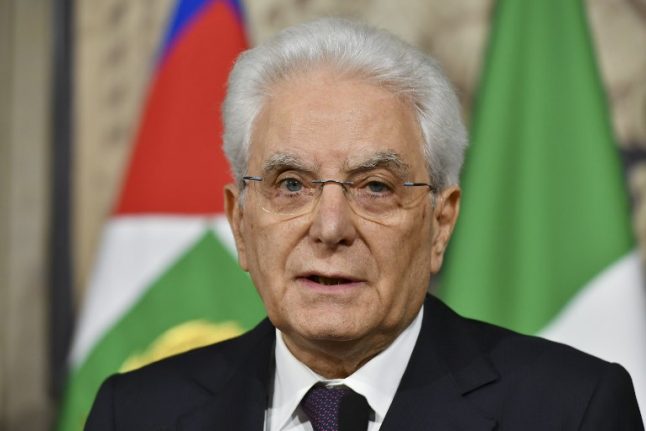 The decision made new elections all but inevitable and prompted calls for Mattarella's impeachment by members of the Five Star Movement (M5S) and the League, the two parties that had been poised to form one of the first fully populist governments in the European Union.

It also caused shockwaves around the world, as eurosceptics from France to the US accused the president of putting European interests before the Italian people.

With the world watching Italy's crisis, the president's press office has released the full statement that Mattarella gave to the Italian press on Sunday night after talks with the populist nominees collapsed, translated into English and French. It's the first time his comments on the consultations have been translated in nearly three months of meetings.

In the statement, Mattarella explains the basis of his decision to refuse to sign off on the alliance's nominee for finance minister, anti-euro economist Paolo Savona.

His argument is that appointing Savona, who has said that Italy was mistaken to join the single currency, would have sent the message – rightly or wrongly – that Italy's new government planned to take the country out of the eurozone via the back door, without having campaigned on a pledge to do so or included the policy in their planned programme.

Here are the key extracts:

'I did everything I could'

“I fostered the possibility of giving rise to a government in all possible ways.

“I waited the time requested for [M5S and the League] to reach an agreement on the agenda and to have it approved by their respective grassroots militants, although I was aware that this would attract criticisms. I accepted the proposal for the conferral of the appointment of Prime Minister, overcoming all perplexities over the fact that a political government be led by a prime minister not elected to a seat in parliament. And I followed, with my full attention, his work to form the government.

“Therefore no one can affirm that I have hindered the formation of the 'government of change', as it has been defined. On the contrary: I accompanied this attempt with a great sense of cooperation, as is dictated by my duties in compliance with constitutional rules in the presence of a parliamentary majority.”

'There can be no diktats on the president'

“I had informed both the representatives of the two parties and the premier-designate, without receiving objections therefrom, that for some ministries I would place particular attention on the choice of nominee…

“[In the appointment of ministers] the President of the Republic performs the role of guarantor and has never been, nor could ever be, subjected to impositions of sorts.”

'Unwillingness to opt for any other solution'

“For that Ministry, I asked for the indication of an authoritative political representative of the majority, coherent with the agenda of the political alliance. A representative who – beyond the respect and consideration that I have for the person – may not be seen as the promoter of a line of reasoning, often manifested, that could probably, or even inevitably, provoke Italy's exit from the euro. This is evidently quite different from having a strong attitude within the European Union in order to improve it for the better from the Italian point of view.

“In response to my request, I regretfully witnessed an unwillingness to opt for any other solution, and the premier-designate relinquished the appointment.”

'It is my duty to protect Italians' money'

“Uncertainty over our position on the euro has raised alarm among investors and savers, Italian and foreign, who have invested in our government bonds and in our companies.

“The rising spread, day after day, increases our public debt and reduces government spending on new social initiatives. The losses on the stock exchange, day after day, burn the resources and savings of our companies and of those who have invested in them. And they configure a tangible risk for the savings of our citizens and for Italian families…

“It is my duty, in fulfilling the task of appointing the ministers, which I am entrusted by the constitution, to pay great care in protecting the savings of Italian citizens.”

'If Italy wants to consider leaving the euro, we have to discuss it openly'

“The decision of joining the euro is of key importance for the prospects of our country and of our youth: if we want to discuss it, we have to do so openly and after a serious in-depth analysis. Also because it is an issue that was not brought up during our recent election campaign.”

'My priority is the constitution and national interests'
“I am not making tonight's statement light-heartedly. Also because I did everything possible to give birth to a new political government.

“In making this statement I am giving prevalence, before all else, to defending the constitution and the interests of our national community.”