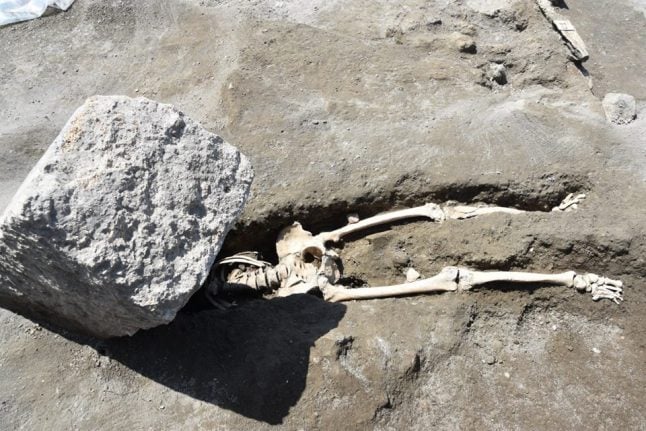 The victim appears to have died after being hit and decapitated by a 300-kilogram rock, sent hurtling towards him by the force of the volcanic flows. The remains of his skull have not yet been found.

The first analyses of his remains show he was aged over 30, with signs of a bone infection in the leg. He probably had difficulties walking, according to the site's superintendent Massimo Osanna, and therefore wasn't able to flee the 79 AD eruption quickly enough.

Osanna, said the skeleton was an “exceptional find”, and was similar to that of another disabled victim found previously.

“Beyond the emotional impact of these discoveries, the possibility of comparing these finds (…) contributes to an increasingly precise story of the history and civilization of the time, which is the basis of archaeological research,” Osanna said. As they were moving the skeleton to a laboratory for tests, archaeologists spotted the remains of a leather purse lying underneath the man which was found to contain coins and what they believe to be his house key.

The 20 pieces of silver, worth the equivalent of roughly €500 today, were presumably what the man was able to grab as he prepared to flee, leading experts to speculate that he was probably a middle-income merchant.

“It is the objects, and the context of the man's life, that can supply us with the real details on the lives and stories of the people of this city,” said Osanna.

The body was found close to the recently discovered Alley of Balconies, one of a series of novel discoveries at the site over the past few weeks. Excavations are currently underway in a northeastern area of the archaeological park which had not been excavated since the immediate postwar period, in order to stabilize walls at risk of collapse.

Last week a house with spectacular colourful frescoes was uncovered, and in mid-May, archaeologists were able to cast the complete figure of a horse for the first time ever at the site. Along with a pig and a dog, it is one of the few animals of any species to be successfully cast at Pompeii.