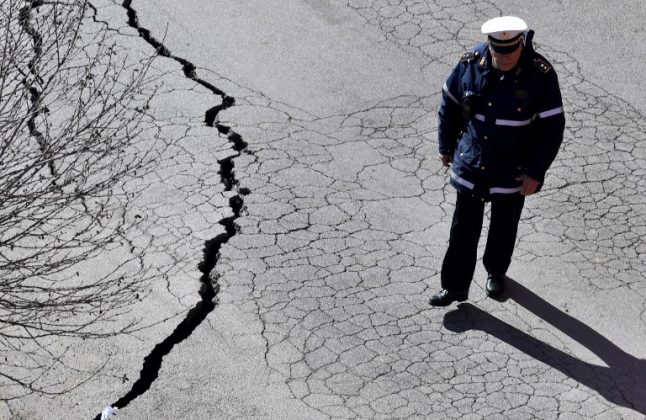 A sinkhole that opened near a building site in north-west Rome in February. Photo: Tiziana Fabi/AFP

Central Italian water authorities recently surveyed the ground under the capital and measured 32 square kilometres of subterranean cavities, prompting them to call for “urgent” intervention.

The underground holes weaken the surface above them, increasing the risk of sinkholes. And the ground seems to be becoming more fragile, the survey reported.

While for most of the past century Rome recorded an average of 30 sinkholes or other collapses per year, since 2008 the annual figure seems to have tripled. In the first five months of 2018 alone, 83 incidents have already been reported, including sinkholes that opened up within seconds and were large enough to swallow cars.

Some of the worst affected areas are the oldest parts of the city – such as the ancient Appian Way running through the south east, now partially reconfigured as a ring road. The area under the Roman highway is thought to be riven with cavities, catacombs, mushroom cellars and other centuries-old traces of human settlement, and has seen at least nine craters in less than two years. “The recent continual phenomenon of subsidence and sinkholes, causing roads to collapse and destabilizing buildings in various parts of the capital, demonstrates that the soil and subsoil is highly fragile, which should not be overlooked,” said the head of the Tiber River Basin authority, Erasmo D'Angelis.

“We are calling for urgent action, whether it be carrying out more sophisticated checks or adding reinforcements.”

Part of the problem is Rome's geology: founded above a floodplain, much of the modern city rests on soft, sandy soil that is easily eroded by water or the vibrations of thousands of cars and scooters traversing the streets daily. The phenomenon is exacerbated by unusually heavy rains, like the ones the capital experienced for much of the past three months, and chronically neglected infrastructure.

The city recently announced a multi-million-euro plan to fix its streets, but progress remains slow. Last weekend the final stage of the Giro d'Italia bike race, which finished with laps around some of Rome's most iconic monuments, had to be cut short after cyclists complained about the dangers posed by loose cobbles, cracked asphalt and potholes.