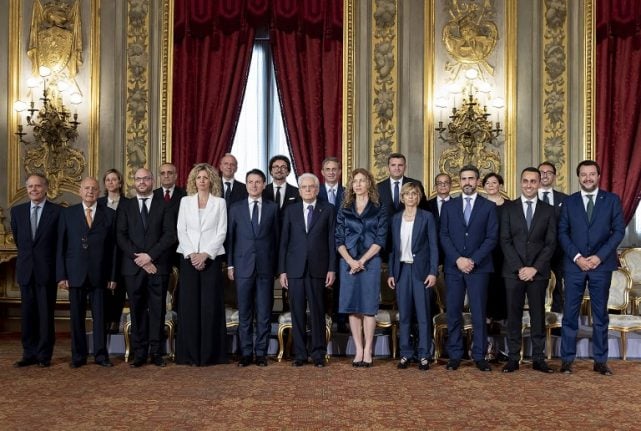 Conte, 53, was plucked from relative obscurity by the Five Star Movement (M5S), first during the election campaign as the potential figurehead of its drive to reform Italy's bureaucracy, then months later as its nominee for prime minister once both parties agreed not to install their own leaders as PM. The law professor has a long (and possibly inflated) CV in academia and legal affairs, but zero experience in public office. The leaders of the M5S and League will serve as his joint deputies. Just 31 years old, M5S leader Di Maio at one point looked to be Italy's youngest ever prime minister after his party won the largest standalone share of the vote in March's election. Yet his coalition partner, the League, wouldn't stand for it and instead Di Maio finds himself with the economic development portfolio – crucial to the Five Star Movement's proposals to reverse austerity measures and boost benefits. The League's party leader, Salvini renounced his ambition – for now – to be Italy's prime minister and settles for the Interior Ministry. The role puts him in charge of Italy's immigration policies, which he has long denounced as too liberal. Salvini, 45, has promised to crack down on illegal immigration to Italy and drastically speed up the process of deporting those who have already arrived. Tria, 69, is the coalition's compromise solution after President Sergio Mattarella vetoed their first choice to fill the crucial position, Paolo Savona (now moved to European Affairs). Unlike him, Tria believes that Italy is better off remaining in the euro, though has called for reforms to the single currency. The political economist favours the League's heavily simplified tax rate, but has expressed concern about the M5S's plans to introduce a form of universal basic income.

The coalition's top diplomat is a Brussels insider: Milanese, 63, twice served as Italy's minister of European Affairs and before that spent two decades in the European Commission. A professor of law, he is considered a deft and courteous negotiator. Bonafede, 41, has been nicknamed the “Mr Wolf” of the Five Star Movement: a close personal ally of Di Maio, he is considered the M5S leader's most faithful fixer and guard dog. Born in Sicily but representing Tuscany in parliament, he has a background in jurisprudence.

Savona, 81, picks up the Europe portfolio after being switched from Finance. The economist and one-time trade minister is a vigorous critic of the European Union and its single currency but claims he's not Europhobic; rather, he says, he wants to oppose “the elites who run it” rather than a united Europe itself. Trenta, 50, is Italy's second ever female defence minister. A political scientist specialized in international cooperation, intelligence and security, she was selected for the post by the M5S even before the election. Trenta has previously advised the Italian government on Iraq and Libya, as well as serving as a reserve in the Italian army, and has said that she wants to modernize Italy's armed forces and better equip them to deal with changing threats.

With a degree in medicine, Grillo, 43, will go some way to reassure those who feared that the M5S-League government would indulge anti-vaccination activists – but not entirely. While she is unequivocally in favour of vaccines, she has said that Italy's current law making shots compulsory for schoolchildren risks doing more harm than good, and has called for a different approach. Costa, 59, is another Five Star nominee picked from outside the world of politics. A former carabinieri officer and regional commander of the Forestry Police, he is best known for his efforts to investigate widespread illegal waste dumping in and around Naples.

Bussetti, 56, is another technocrat but this time one picked by the League. Like Salvini, with whom he appears in numerous Facebook photos, he is from Lombardy. He has spent much of his career studying and teaching at schools and universities in Milan, including as a sports instructor.

In many respects Centinaio's biography resembles Salvini's: entering northern politics as a teenager, 46-year-old Centinaio has belonged to the League for most of his adult life and espouses some of its most hardline views, including opposing the reform of Italy's citizenship laws and advocating mass deportation of immigrants. He was once famously recorded calling the Sicilian-born speaker of the senate a “shitty peasant”. Stefani, 47, is a two-time senator and long-term member of the League. She'll represent the party's traditional ideals of federalism and regional autonomy.

Puglia-born Lezzi, 46, will defend the interests of Italy's impoverished south, where the M5S picked up the bulk of its votes. She's the first minister dedicated exclusively to the region, which has previously been included in the more general Regional Affairs portfolio. The senator was criticized before the election for failing to pay back all her parliamentary expenses, as M5S requires of its lawmakers, but put it down to oversight.

Currently the M5S's party whip in the senate, 44-year-old Toninelli has accompanied Di Maio to many of the coalition talks at the presidential palace. He is another of the party leader's allies and will be responsible for sensitive matters like the construction of a controversial cross-border train line between Turin and Lyon, which the M5S has traditionally opposed but will face pressure from the League to accept. Catholic, conservative Fontana is a League die-hard who opposes abortion and euthanasia and has called same-sex marriage a threat to Italy's “community and traditions”. He was one of those calling for terminally ill British boy Alfie Evans to be brought to Italy for further care when doctors in the UK judged that nothing more could be done to save him.

Top criminal lawyer Bongiorno, 52, has successfully defended a string of high-profile clients, including former prime minister Giulio Andreotti and Raffaele Sollecito, accused of helping murder British student Meredith Kercher. She also co-founded an organization to assist women subjected to harassment. Having previously represented other right-wing parties, she joined the League ahead of this year's vote, in which she was elected to the senate. Bonisoli, 57, ran unsuccessfully for the M5S in the last election. His day job is director of an art school in Milan, and he has promised to seek greater investment in arts and culture as well as focussing on attracting “quality tourism” to Italy.

A prominent lawmaker within the M5S, Fraccaro, 37, will take charge of the party's efforts to root out corruption and red tape within parliament. He has already promised to cut the annuities paid out to lawmakers for life, which he calls “anachronistic and unacceptable”. He is the first minister to be charged with handling “direct democracy” in the history of Italy's government.