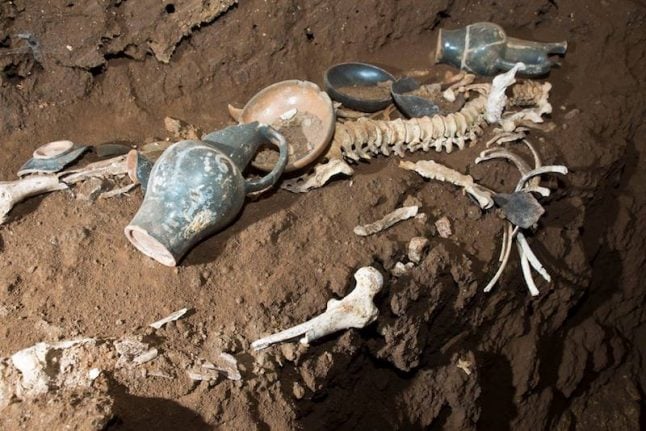 The burial site, discovered in the Case Rosse area to the west of the city centre, has been named the 'Tomb of the Athlete' because of a distinctive finding amongst the other funeral offerings: alongside the remains of four people, archaeologists discovered two strigils, a type of metal hook that Ancient Romans used to scrape off sweat and dirt after exerting themselves, especially in sport.

Dating from the 4th century BC, the tomb came to light during excavations to extend an aqueduct. Having spotted the chamber just two metres below ground level via a laser survey, specialists were amazed to find it perfectly intact, complete with offerings of chicken, rabbit and what's believed to be lamb. Other items buried alongside the three men and one woman inside include plates, jugs, fragments of pottery and a bronze coin, stamped on one side with the goddess of wisdom, Minerva, and on the other with a horse's head and the word: “ROMANO”.

Little is known about the human occupants: two of the men, one aged around 50 and the other in his 30s, were laid out on counters inside the burial chamber, while another man aged between 35-45 and a woman of unknown years were found on the ground.

The Soprintendenza Speciale di Roma, the body charged with looking after Rome's heritage, says it plans to study the contents in detail over the coming months. The entrance to the tomb. Photo: Soprintendenza Speciale di Roma

As the find demonstrates, Rome remains a treasure trove even today, after centuries of inhabitation. Disturbing its soil frequently turns up ancient artefacts and construction projects have more than once been interrupted by the discovery of frescoes, catacombs or entire buildings underground.

Work on the Metro Line C uncovered a military barracks, a solarium and what's believed to have been Rome's first university underneath the modern city. Some of the hundreds of artefacts unearthed are now on display to the public at the recently completed San Giovanni station. While often an emblem of sportsmen, strigils were also used by non-athletes when they bathed and may have been associated with ritual cleansing and death.

Benito Mussolini, the Italian dictator who embraced much of the symbolism of Ancient Rome, had a statue of an athlete with a strigil included outside the Olympic Stadium complex in the north-west of the capital, where you can still see it today.