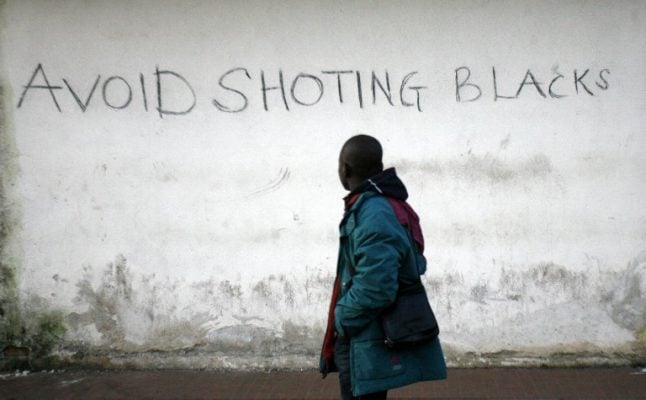 Graffiti in Rosarno, Calabria, in January 2010 after farm workers were shot at with air rifles. Photo: Carlo Hermann/AFP

Soumaila Sacko, 29 and from Mali, was killed on Saturday night in a shooting that also injured two other migrants who, like him, lived in the tent city of San Ferdinando in Reggio Calabria, a sprawling encampment in that houses hundreds of poorly paid people who pick the southern region's crops.

According to Drame Madiheri, a fellow Malian who was shot in the leg, the three men had gone to an abandoned factory nearby to collect sheet metal to build shacks. They had picked up three sheets, he said, when a white man drove up and fired on them four times with a shotgun, hitting Sacko in the head.

Sacko, who like his companions was in Italy legally, was taken to hospital but did not survive. He had lived here since 2010 and joined efforts to secure more rights for migrant workers, according to the USB grass-roots trade union, which helps represent the thousands of foreign labourers employed in southern Italian agriculture.

The USB called a strike on Monday in protest at Sacko's death, which it noted came hours after Matteo Salvini of the anti-immigration League party was sworn in as Italy's interior minister and deputy prime minister.

“The good times for illegals are over,” Salvini had declared earlier on the day of the shooting, during a visit to a migrant centre in Sicily where he said: “Italy and Sicily cannot be Europe's refugee camp”. While police are reportedly not treating the shooting as a hate crime, local activists speculated that it was racially motivated.

“Soumaila is dead because someone around here decided he should be. Here it's not only the mafia, cancer or lack of health care that kills you, racism does too,” said Father Roberto Meduri, a priest who campaigns for migrants' rights.

The USB plans to hold nationwide demonstrations on June 16th to highlight the conditions faced by Italy's migrant workers. On Sunday residents of the San Ferdinando camp protested by setting fires, which firefighters put out without injury.

The shantytown sprang up after three labourers were shot with an air rifle in January 2010, triggering clashes between locals, migrants and police and prompting hundreds of foreign workers to flee the town proper.

According to the Italian aid group Doctors for Human Rights (Medu), as many as 3,000 labourers – the majority of them with valid residence permits for Italy – live in or around the camp at the height of the harvest, working for minimal wages and sleeping without electricity or running water in conditions that the NGO describes as “shamefully inhumane”. It calls the tent city “one of the biggest ghettoes in Italy”.