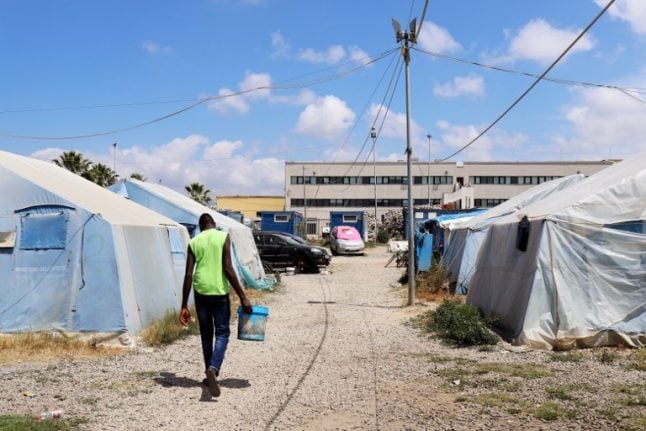 The citrus and kiwi season is over in the agricultural plains of Gioia Tauro, in Calabria, but several hundred African migrants continue to live at the makeshift camp, hoping for a few days of work.

Tensions are running high after Soumaila Sacko, a 29-year-old Malian, was shot in the head on Saturday while he was looking for metal sheets in a disused factory.

Investigators have arrested a relative with ties to one of the factory's owners, but for the victim's comrades, the murder is linked to the rhetoric of Salvini, who just a few hours earlier had proclaimed: “The good times for illegal immigrants are over, get ready to pack your bags.”

“They think we are animals. They shoot us as if we were animals,” says one of the camp's residents, while another, a friend of Sacko's, inconsolably cries out in grief. There is a nauseating stench of rubbish lingering over the camp where hundreds are crammed into small tin huts and old tents covered with plastic sheeting. There's no running water, electricity is pinched from a passing cable, it's stifling hot in summer and biting cold in winter.

In some huts, makeshift shops offer drinks, food, detergent and one larger tent bears a sign saying, “Church of the African Union”. All over the camp there are traces of the various fires that have ravaged it – the most recent in January ripped through half the tents, killing a 26-year-old Nigerian woman.

In Italy, this slum and others which have sprung up near the tomato fields in the southern region of Puglia have become symbols of lawlessness, grim wastelands where so many migrants have wound up.

And yet, in San Ferdinando, more than 90 percent of the workers are living legally in Italy – asylum seekers or with residency permits – according to the human rights association Medu, which runs a clinic during high season.

Around 75 percent of them are employed without a contract and all are paid depending on what they collect: 50 cents for a crate of oranges, one euro for a crate of mandarins.

READ ALSO: From migrant worker in Calabria to entrepreneur The vast majority have been in Italy for less than three years, but some have lived there much longer, like Johnson, a Liberian who everyone calls “Prince”.

“I've been in Italy for 17 years. I worked for eight as a mason in the north, and then I lost my job so I ended up here,” he says. Johnson is one of the luckier ones – he lives in a new camp comprised of large blue tents, set up in 2017 by the authorities.

Standing just 200 metres from the old shantytown, the camp offers running water and electricity, toilets, showers, a mosque, Italian classes and even recycling.

“We try to make the reception as dignified as possible,” says recently laid-off dock worker Dario Nasso, who is involved in the cooperative that runs the new facilities.

But the camp's 560 places were quickly filled. The old slum endures and so do its tensions.

Following Sacko's murder, Michele Di Bari, a top regional official came to meet with a delegation from the camp.

“In tragic situations, there can be tension and we must defuse it, but we must not lose sight of the aim: to close the camp,” he said during the meeting at the San Ferdinando town hall.

Aboubakar Soumahoro, a representative for the USB Union where Sacko was an activist, urged change: “We are exploited and no one defends us, we are the targets of violence. There has never been any 'good times' for us,” he said, in a reference to Salvini's anti-migrant rhetoric. Mamadou Dia, from the Medu NGO said the authorities must do more. “Why do they insist on setting up these camps in the middle of an industrial zone when there are so many empty houses in the villages' surrounding plains?” he asked.

But in an area in the grips of the powerful Calabrian Ndrangheta mob – the San Ferdinando municipal council has already been dissolved several times for mafia infiltration – the inhabitants tend to look the other way.

Yet Sacko's death may serve as an impetus for change. After three days of silence from Italy's new government, Prime Minister Giuseppe Conte paid tribute to the slain Malian on Tuesday during his first public speech.

“Our heartfelt thoughts go out Sacko and his family. But this is not enough. Politicians must take responsibility for the tragedy of these people and guarantee them legal working conditions,” said Conte, eliciting a standing ovation in parliament.