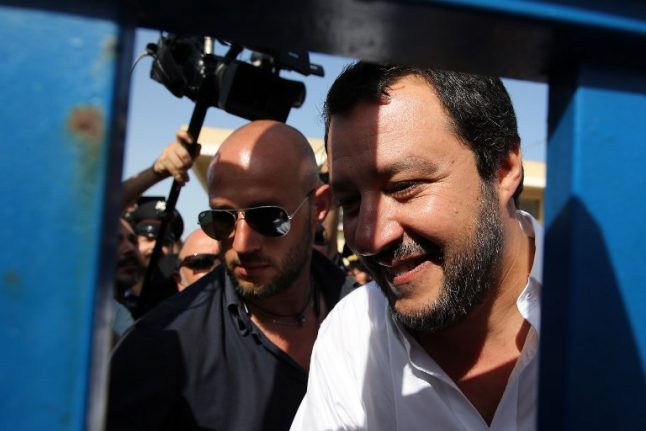 “The good God put Malta closer to Africa than Sicily,” said the nationalist Salvini, as a new wave of migrants rescued in the Mediterranean prepared to land in Italy.

“It is not possible for Malta to say 'no' to any request for help,” he continued.

Salvini's comments came after Malta reportedly refused to come to the aid of a migrant rescue ship Seefuchs, which was stranded with 119 migrants onboard in the Mediterranean due to violent sea conditions.

The ship had embarked on a mission coordinated by the Italian coastguard on Wednesday to rescue migrants aboard a dinghy in distress.

But after evacuating the dinghy, the Seefuchs was forced to call for assistance from a bigger vessel, unable to navigate in the deteriorating weather conditions without putting the migrants' lives in danger.

According to the German NGO Sea-Watch, which attempted in vain to assist the Seefuchs due to the adverse conditions, Valletta refused to offer assistance, apart from agreeing to accept medical evacuations by air.

The Maltese government was quick to deny it had done anything wrong.

“With regards to Search and Rescue, Malta acts in accordance to the international conventions that apply,” the government said in a statement on Friday evening.

“Malta will continue to respect these conventions with respect to the Safety of Life at Sea (maritime treaty), as happened in this latest case and indeed in each case.”

The Seefuchs was finally reached on Friday afternoon by a tanker and an Italian coast guard ship and is expected to dock at the port of Pozzallo in southern Sicily in the evening.

The migrants on board were reportedly in a state of distress after spending 70 hours in rough seas.

Another 232 migrants, on board the NGO ship Sea Watch 3 are also set to disembark in the southern Italian state of Calabria Saturday morning after more than three days at sea.

“Can our Maltese friends tell us how many ships carrying immigrants docked in their ports in 2018?” he said in a statement.

“How many people landed, how many asylum applications were examined and how many accepted? Italy wants to solve problems, not create them.”

Salvini — who is also deputy prime minister — has repeatedly promised to stop migrants arriving in Italy and speed up deportations.

He accuses fellow EU nations of abandoning Italy in the struggle to deal with migrant arrivals, recently announcing that Italy cannot be “Europe's refugee camp.”

The southern European nation has seen more than 700,000 migrants arrive on their shores since 2013.

However, a controversial agreement between Italy's former centre-left government and authorities and militias in Libya has triggered a decline in overall arrivals of some 75 percent since the summer of 2017.

But so far this year Italian authorities have still registered more than 13,500 arrivals.