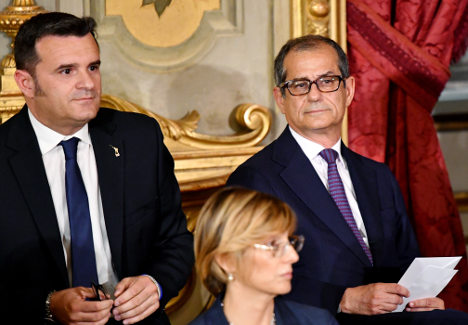 “The position of this government is clear and unanimous. There are no discussions taking place about any proposal to leave the euro,” Tria said in an interview with major daily Corriere Della Sera.

The new coalition — led by the anti-establishment Five Star Movement and nationalist League — has repeatedly said it wants to be part of the economic bloc since publishing its policy programme last month, in an attempt to allay fears in Brussels about previous anti-euro attacks from both parties.

“Not only do we not want an exit from the euro, we will act in such a way so that the conditions that could put our presence in the eurozone in doubt don't come about,” added Tria, in his first big interview since taking office.

The new government led by Giuseppe Conte was able to take power thanks in large part to the presence of Tria, a political economy professor, in a revised cabinet that saw staunch eurosceptic Paolo Savona moved from the economy ministry to European affairs.

Tria's policies largely dovetail with the far-right League apart from him wanting to stick with the euro.

He is in favour of drastic tax cuts promised by the government — two bands of just 15 and 20 percent — but would like to see a VAT rate rise.

Tria has also said he and the government aim to reduce Italy's debt/GDP ratio, which is currently the eurozone's second-highest at 132 percent, despite promises to increase welfare spending and roll back pension reforms.

Tria said: “It's an explicit objective of this government, about which the prime minister has already spoken. There should be no doubts.”