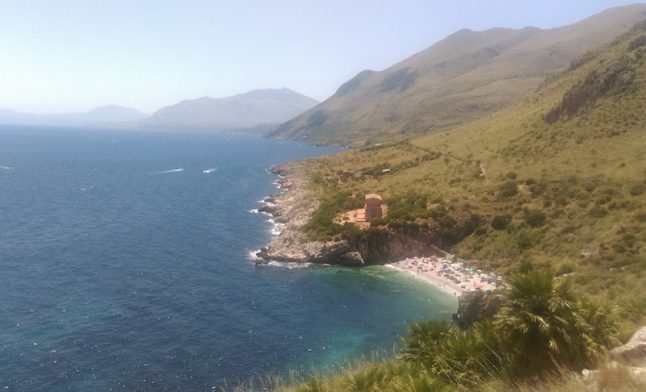 A few miles southeast of the seaside town of San Vito Lo Capo in north-west Sicily lies a expansive nature park: Riserva Naturale dello Zingaro. If this area hadn’t been designated a reserve it would be full of private, fancy vacation homes.

Coming here, it’s better to bring a pair of comfortable shoes, along with water shoes to deal with the pebble beaches. Cars are not permitted inside the reserve so you’ll have to set out on foot through the roughly seven kilometres of dirt paths connecting everything. It’s approximately one kilometre to the first beach once you enter the reserve, and there are several rustic shelters where you’re welcome to stop and take a break.

Not really bothering to research the area ahead of time, my girlfriend and I marched off from the parking area downhill in our vibrantly coloured flip-flops, completely unaware of the regret and pain that we’d feel on the hike back. Nevertheless we went on, I with my naïve nothing-can-prevent-me-from-exploration American attitude and her (she’s Italian) with the it’s-too-late-there’s-nothing-we-can-do-about-it-now approach.

Here at Zingaro the sea may not be as clear as it is around other parts of Sicily, but it still has a lot of different shades – from baby blue to cerulean to what looks like denim or cobalt. It’s all more than enough to put my southern New Jersey Atlantic Ocean to shame. The further into the reserve you travel the more rewarding it becomes, even if the reward is partially just escaping the men wearing pastel-colored Speedos who feel the need to stretch and bend at every possible angle. With an uncanny resemblance to freshly hatched turtles emerging from their nest and making a frenzied dash to the sea, people here tend to stay at the first beach.

“Sometimes the road less travelled is less travelled for a reason,” says Jerry Seinfeld in one of his routines. At Zingaro, that reason is the sun: like an investigator in those old TV shows who is interrogating a suspect, and the investigator shines the desk lamp into his suspect’s face who then starts to sweat profusely and pull at his shirt collar not knowing what else to do other than confess. To what, though? Was it trespassing?

There are a couple of signs reminding everyone to respect the wildlife within the reserve. Most of what we saw were birds of prey. Peregrine falcons and kestrels are common here. There were plenty of lizards too, but they were quick to hide under the rocks when they were spotted. The animal that stood out on the sign was the wild boar. I’d never seen one before and I was anxious (not to mention the memory of what happened to Robert Baratheon in Game of Thrones remains fresh in my mind).

Walking along the path lined with almond trees – which are much more beautiful than I had imagined, with white and pink flowers – and twisted olives, you’ll find yourself at a crossroads. Left goes to the second beach, right takes you to La Grotta dell’Uzzo.  Outside the entrance of the grotto are fig trees that are who knows how many years old and almost completely picked clean by the wildlife. Given the grotto’s proximity to the beach, it’s no wonder the area has been consistently inhabited for the past 10,000 years or more. For some reason I have a difficult time imagining the cave dwellers casually going for a swim, but the community of hunters that lived here adapted to the area, learning to farm the land and to fish. Inside the cave have been found human remains of adults and children dating back to the Mesolithic era, as well as the remains of animals they hunted.

It’s a nice place to sit and chomp down a snack, enjoy the shade, and reminisce about the “simplicity” of prehistoric life since you don’t have to worry about large predators looking for a nice juicy person in this area anymore: throughout the reserve, remains of rhinos, lions and mammoths have been unearthed. It’s worth stopping by, not just to get out of the sun for a bit, but to really take in that uniquely damp cave smell. The walk to the next beach was one of the most tranquil I’ve ever experienced. We didn’t encounter a single soul on the path from the grotto. The salty sea breeze was crisp and refreshing, making your lungs feel truly alive — an astonishingly noticeable difference compared to the acrid summer smells of any major city.

Cala Marinella is unique here in the sense that it’s not so much a beach as it is a bunch of rocks to jump from. The water was a little colder than the other beaches due to its depth; people were full-on diving. Once you make the leap, there is a small cove maybe ten metres away that you can visit and relax in. This cove is one of the few shaded areas in the reserve. The only difficulty here is that it can be tough to climb back up from the sea, because the rocks can get a little slick – this is where the water shoes helped. But once you’re out, you’ll be immediately ready for another dive. It’s a nice adrenaline rush.

After you’ve finished here the next stop is Cala Berretta. This was the last beach that we visited for the day and perhaps the rockiest. We shared it with maybe seven or eight other people (none of whom wore Speedos), which during this time of year seems nearly impossible at any other beach. The sea here was especially calm thanks to the small cape breaking the waves. About an hour after we’d arrived the sun began to set and we had a little less than four kilometres to walk back to the entrance. While in the city this seems like a trivial distance, it takes a solid hour to walk that same distance along the winding, pebbly paths here, and I wasn’t about to risk an encounter with a boar at night – but if you have more time to explore there are several other beaches before you reach Scopello, a nice little fishing town.

Our way back was where the problems occurred. The endless thwack-thwack of the two pairs of flip-flops. An occasional rock finds itself between the toes. The lethal, unapologetic sun. And, finally, the unwelcome sound of a flip-flop strap pulling loose, breaking, and the faint whimper of annoyance that accompanied it.

“Do you want a piggyback?” I asked.

She made the final few kilometers back to the parking lot barefoot. The water shoes, although good at protecting your feet in the sea, are terrible for walking and draw in rocks like a magnet on land. I guess it’s all in the name. Needless to say, we were both blistered by the time we arrived back at the car.

It all made me appreciate the fact that we could come for vacation and weren’t struggling for survival (not really, anyway), as the people who lived in the caves here did every day.

Peter Briggs is an American who lives in Milan, where he works as an English teacher.