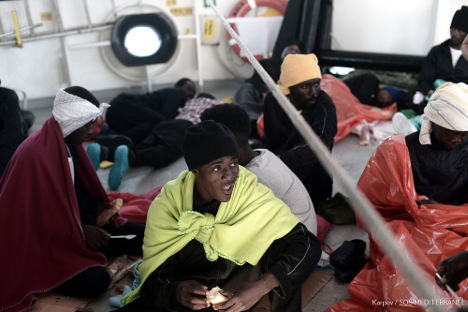 The Aquarius boat, accompanied by two Italian vessels, is making its way across the Mediterranean to Valencia after Italy and Malta refused to allow it to dock at their ports over the weekend.

But on Thursday, huge waves and strong winds forced the convoy, carrying 629 rescued migrants, to take a detour along the coast of the Italian island of Sardinia.

Asked by a journalist whether the ship would arrive in Spain, Italy's new far-right interior minister Matteo Salvini said: “Of course, it's not as if they can now decide where to start and finish the cruise.”

“It seems to me that their arrival is expected Saturday without problems,” he added.

French charity SOS Mediterranee said Thursday that the Italian coast guard vessel guiding the Aquarius ship had decided to divert the convoy north along the east coast of Sardinia to bypass four-metre (13-feet) high waves and winds of 35 knots (65 km/h).

The move was to “protect itself from the otherwise unbearable bad weather for the people on board, who are exhausted, suffering from shock and seasickness,” the NGO said on Twitter.

Doctors without Borders (MSF) coordinator Aloys Vimard, who is on board the boat, tweeted: “Most people are inside lying on floor including pregnant women, breastfeeding mothers, babies, burns patients, people who almost drowned.”

The majority of the migrants are from Africa, while several others come from Afghanistan, Pakistan and Bangladesh, according to MSF.

The head of the Spanish branch of MSF David Noguera condemned the EU for a lack of coordination.

“The detour of the Aquarius is clearly a symbol of the failure of the European Union and European governments with their contradictory policies,” he told AFP by telephone from Barcelona.

“It is a very negative precedent. The truth is there is a question on the table as to whether this is a single event which is resolved quickly, or if we will no longer be allowed to dock in Italy and the blockage continues which would completely change rescue operations.”

The plight of the Aquarius has again highlighted the failure of EU member states to work together to deal with the influx of migrant arrivals since 2015.

But the French foreign ministry on Thursday said it was ready to welcome migrants aboard Aquarius who “meet the criteria for asylum” after they arrive in Spain.

Salvini has vowed to stop foreign boats carrying migrants from arriving in Italy, a policy that has also affected a US military ship.

The Trenton rescued 40 migrants off the coast of Libya on Tuesday and was still waiting for instructions on where it could dock on Thursday, the US Navy said.

It added that during the rescue operation “the crew initially observed approximately 12 bodies in the water that appeared to be unresponsive,” but said that they “prioritised recovering those who needed immediate help”.

As well as tension between Malta and Italy over who was responsible for helping the Aquarius rescue ship, another row erupted this week when French President Emmanuel Macron accused the Italian government of “cynicism and irresponsibility”.

Italy's new economy minister shelved a meeting with his French counterpart in Paris on Wednesday as a result of the dispute.

However, Italian Prime Minister Giuseppe Conte said Thursday he believed the row had been resolved after a phone conservation with Macron and the pair are set to meet Friday in Paris for talks.

On Thursday Pope Francis called for “assistance from the entire international community” to help “isolated and vulnerable” migrants.

“In order to acknowledge and respond to the current migration situation, the assistance of the entire international community is needed, since its transnational dimension exceeds the capacities and resources of many States,” said Francis in a message to participants at a conference on international  migration at the Vatican.

The contentious issue of how to deal with migrants is expected to dominate an EU summit at the end of June.