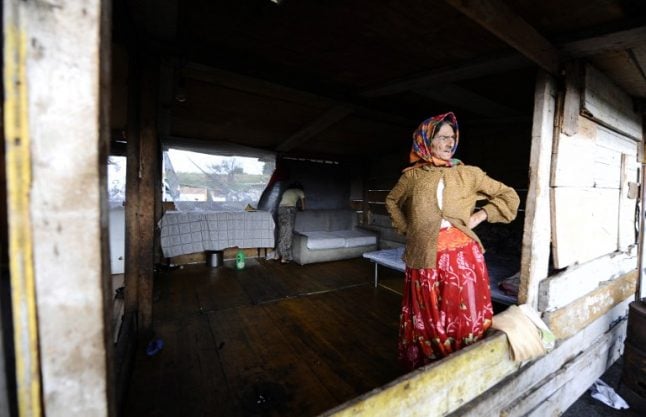 A woman at a Roma encampment outside Rome. Photo: Christophe Simon/AFP

Salvini, head of the anti-immigration League party that is the junior party in Italy's governing coalition, plans to order “a survey of Roma in Italy to find out who, how, how many”, he told a northern Italian TV station on Monday, saying the information would be collected in a “register”.

“Irregular [undocumented] foreigners will be deported via agreements with other countries, but Italian Roma unfortunately you have to keep at home,” he was quoted as saying.

Salvini has a long history of targeting Italy's Roma and Sinti population, which numbers an estimated 130,000-170,000, around half of whom are believed to be Italian citizens.

The League has already proposed creating exceptional laws for Roma people that would make it easier for authorities to remove children from their families if they were found not to be attending school, while Salvini has called for Roma camps to be “bulldozed” and accused Romani of preferring crime to work.

Many Roma activists complain of deep-rooted discrimination in Italy, saying that it is difficult for them to find permanent housing or employment and that they are the frequent victims of hate crimes. One 2015 survey found that Italians have a more negative view of Roma than any of their European neighbours, despite the relatively small Roma population here. And in 2014, the European Commission warned Italy that squalid government-run camps “seriously limit fundamental rights“.

READ ALSO: Inside one of Italy's Roma camps “The interior minister does not seem to be aware that in Italy, the law does not allow a census based on ethnicity,” responded Carlo Stastolla, president of Associazione 21 Luglio, a group that campaigns for the rights of Roma and Sinti people in Italy.

“Furthermore there is already data on people living in formal and informal camps, and the few Romani without papers are in fact stateless, and therefore cannot be expelled,” he told Ansa. “Let's remember also that Italian Romani have been present in this country for at least half a century and are sometimes 'more Italian' than many of our compatriots.”

Salvini later denied planning to “take anybody's fingerprints”, saying that his intention was to investigate the situation in Roma camps and establish how European funding was being spent. His coalition partner and joint deputy prime minister, Luigi Di Maio of the anti-establishment Five Star Movement, told reporters that he was “glad Salvini has denied any idea of a register or census of immigrants, because if something is unconstitutional it cannot be done”.

Amid criticism from his ally and opponents alike, however, Salvini on Tuesday insisted in a tweet: “I'm not giving up and I'm pushing ahead! The Italians and their safety first.”

Salvini's pledge to expel undocumented Romani is part of a hardline position on immigrants in general: he promised his supporters mass deportations of foreigners staying in Italy illegally, and the new government has already moved to block the arrival of NGO boats carrying people rescued from the Mediterranean.

The controversy over the Aquarius, a French rescue ship left stranded with 629 people aboard when both Italy and Malta refused it entry, exposed the deep rifts between EU countries over the migration crisis. Rome has called for migrants arriving in southern Europe to be automatically and obligatorily resettled across the entire bloc, something that other member states have so far resisted.

Meanwhile Salvini added that he would soon meet Pope Francis, who has led the Catholic Church's outreach efforts to migrants, refugees, Romani and other marginalized groups.

Calling the occasion “a great joy”, Salvini said that while the pope speaks of the good of everybody, “we smaller beings say we'll guarantee the rights of refugees, but that there isn't room for those who aren't escaping war”.