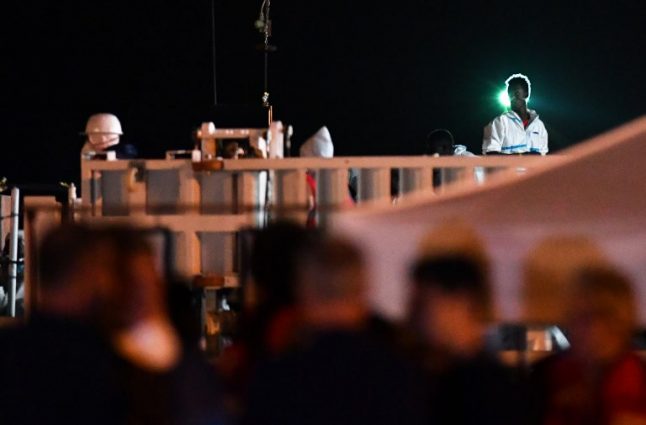 “They were rescued in multiple operations, 42 of them survived drowning and they need urgent medical care and psychological support,” the UN refugee agency said, adding that it was at the scene along with Italian authorities and humanitarian organisations.

A dozen very dehydrated migrants, including six children, three women and one man, had already been sent to Pozzallo and taken into care by the Italian Red Cross.

“And so begins – at 1.28 am, with more than 500 people rescued at sea, 40-plus survivors of a shipwreck, one corpse and who knows how many missing, many medical and psychological needs, a long wait for safe harbour at Pozzallo – our World Refugee Day.”

It is not known whether they were part of the group of 41 migrants rescued from a vessel in distress off Libya last Tuesday by the USNS Trenton, which transferred them to the Diciotti. The crew of the US fast transport ship also spotted 12 bodies in the water but were unable to locate them during a search after the rescue, the US Navy said.

A nearby ship from the NGO Sea Watch offered to help provided it could dock with the migrants at an Italian port, which the Italian authorities refused.

Italy's hardline interior minister Matteo Salvini has warned that NGO migrant rescue ships would not be allowed to unload their “human cargo” in Italian ports. The new anti-immigration government last week banned the French NGO-operated vessel Aquarius, with more than 600 migrants on board, from docking in Italy, causing uproar and a sharp spat with France.

Salvini, who took office on June 1st, accuses the charities of being complicit with human smugglers operating in Libya. “These people should know that Italy no longer wants to be any part of this business of clandestine immigration and they will have to look for other ports to go to,” he said at the weekend.

An Italian court, however, on Tuesday dropped due to lack of evidence a case in which two NGOs, including Sea Watch, had been accused of having links with human smugglers and facilitating illegal immigration to Italy.

Salvini said on Tuesday that Italy would submit a proposal on migration policy to its European partners in “two or three days”.