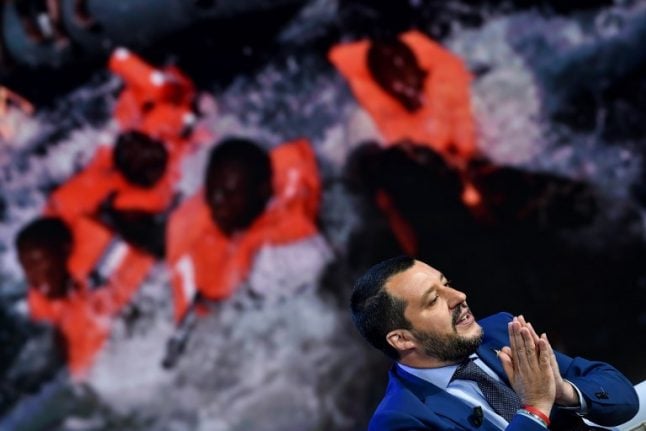 Matteo Salvini speaks during the Italian talk show "Porta a Porta" on Wednesday as a picture of migrants is seen in the background. Photo: Andreas Solaro / AFP
Malta — which is also refusing to take in the boat in a new diplomatic standoff with Italy — nevertheless said it had sent in humanitarian supplies.
“The Lifeline, an illegal ship with 239 immigrants on board is in Maltese waters,” Italy's far-right Interior Minister Matteo Salvini wrote on Facebook. “These boats can forget about reaching Italy, I want to stop the business of trafficking and mafia.”
Salvini's tough talk came on the eve of an emergency mini-summit in Brussels to address the divisive issue of how the EU can tackle the renewed influx of migrants and refugees seeking a new life in Europe.
Just three weeks in office, Italy's new populist government is digging its heels in on campaign promises to stop the influx of migrants, threatening to seize rescue ships or barring them from its ports.
The crisis has also caused ructions in Germany, with Chancellor Angela Merkel facing a rebellion from her coalition allies over her policies.
Meanwhile, more than 400 migrants were rescued in three operations off the coast of Spain on Saturday, just days after Madrid took in the more than 600 rejected by Italy and Malta. And the Libyan navy said five people died and nearly 200 were rescued off its coast while trying to cross the Mediterranean.
Threat to seize boats
The Italian government has said both the Lifeline, run by German NGO Mission Lifeline, and another ship Seefuchs, run by another German charity Sea-Eye, — would be seized and directed to Italian ports for investigation “into their legal status”.
Rome accuses the Lifeline of having acted in contravention of international law by taking on board migrants while the Libyan coastguard was intervening.
Earlier this month Salvini triggered an EU-wide row when he barred the French charity-run Aquarius rescue ship, carrying 630 migrants, from docking in Italy. Malta also refused to take it in and the ship was later welcomed by Spain.
Salvini said on Friday that Malta should open its ports to the Lifeline, adding: “Clearly, the boat should immediately be impounded and its crew arrested.”
But Maltese Prime Minister Joseph Muscat said the Lifeline “broke rules” by ignoring Italy's directions and should move towards its original destination “to prevent escalation”.
“Despite having no responsibility Malta just provided humanitarian supplies” while its armed forces carried out the medical evacuation of one passenger, he said.
As the two neighbours squabbled, a Danish cargo ship carrying 113 migrants was stationed near the Sicilian port of Pozzallo waiting for instructions from Italy. The Alexander Maersk changed course after picking up a distress call
Friday, a spokesman for Maersk Line said, without specifying where the migrtants were rescued.
'Awaiting diplomatic solution'
Mission Lifeline denied Italy's accusations regarding the rescue in Libyan waters, saying it was the best equipped vessel to help.
“We are waiting for a diplomatic solution, discussions are underway between different states to host the Lifeline and those rescued,” the organisation's representative in Germany, Axel Steier, told AFP, adding that 14 women and four children were among those on board.
The issue of migration was thrust to the forefront of the EU agenda after Italy turned away the Aquarius. But the Aquarius defiantly vowed to continue its work and an AFP photographer on board said Saturday that it was currently responding to distress call in Tunisian waters.
EU tensions
Italy's hardline stance comes at a time of deep EU tensions on immigration. Sunday's mini-summit is supposed to prepare for a full summit next week, where 28 EU leaders will discuss plans to overhaul the bloc's asylum system, which has been under severe pressure since the migration crisis exploded in 2015.
Merkel — facing a ferocious political backlash for letting in over one million asylum seekers into Europe's biggest economy — played down expectations of a quick solution.
“We know that no solution will be reached on Thursday and Friday at the level of the 28 member states… on the overall issue of migration,” she said on a visit to Lebanon. Instead, she said, “bilateral, trilateral and multilateral” deals must be
reached to tackle the issue.
German Interior Minister Horst Seehofer warned Monday he would give Merkel a fortnight to find a European deal to curb new arrivals, failing which he vowed to order border police to turn back migrants.
Czech Prime Minister Andrej Babis also said on Friday he was ready to start turning away migrants if Berlin and Vienna did so.
By AFP's Lucy Adler