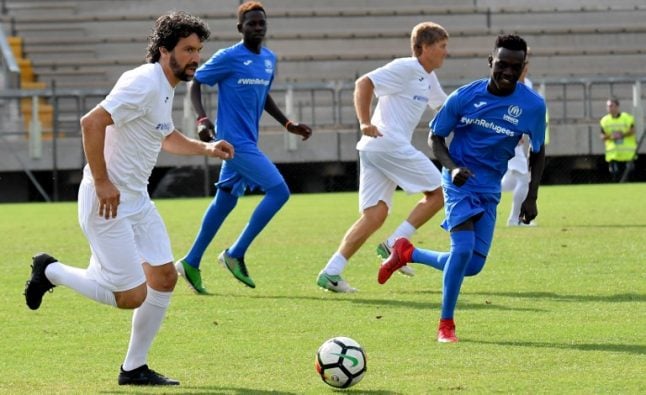 Former Italian football player Damiano Tommasi vies for the ball during a friendly match against a team of young refugees organised by the United Nation's UNHCR in Rome on Saturday. Photo: TIZIANA FAB
Under the hot Roman sun, AS Roma legend Damiano Tommasi led his team including '98 World Cup winner, French national Vincent Candela and AS Roma star Simone Perotta onto the pitch.
Sporting sky-blue kits, their visibly awe-struck opponents, a team of refugees and asylum seekers all under the age of 18, were eager to show off their skills on the pitch.
“I'm convinced that initiatives like these are very useful,” said Marcello Mancini of the Italian Football Coach Association (AIAC Onlus) which helped organise the event along with the UNHCR and the Italian Football ssociation
(AIC).
“The world of football can be a megaphone able to promote, especially among young people, values such as solidarity and openness to those who, through no fault of their own, find themselves from one day to the next living in fear and without any stability.”
Beaming, taking selfies in the changing room and triumphantly celebrating their goal as the crowd danced and applauded, the event represents a moment of fun for the young team as tensions over immigration reach the boiling point in Italy.
Italy's new far-right interior minister has cracked down on immigration, promising to stop migrant arrivals and speed up deportations.
“Sentiment (towards refugees) has been a bit particular, not only in Italy but in Europe in general,” said former AS Roma star Damiano Tommasi. “The 'other' scares us. And it is right to support these events that can help the inclusion because that is the future.”
It is the second year that the Champions #WithRefugees match has been held between footballing stars and those integrating into Italian society. The event marks World Refugee Day which took place on June 20th.
“It's always important, it's a good cause. There is always a pleasure and a happiness to meet again and especially for the charity, for the refugees,” said former AS Roma player Vincent Candela.
“We know football has no colour, no borders. That's the good thing about being on the field: we're all together.” A young refugee (R) shakes hands with a member of a team of former professional footballers prior to the start of their friendly organised by the United Nation's UNHCR in Rome on Saturday. Photo: Tiziana Fabi/AFP