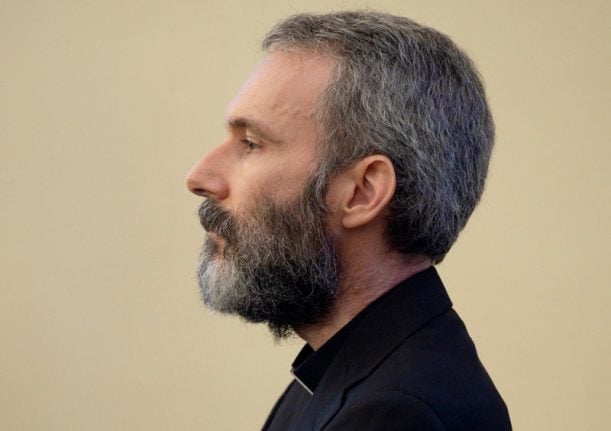 A handout photo taken and released by Vatican Media on Saturday shows Father Carlo Alberto Capella during a trial at The Vatican.
Monsignor Carlo Alberto Capella pleaded guilty on Friday, the opening day of the court hearing, saying he had gone through a “personal crisis” and felt “useless” as a counsellor at the embassy.
The 51-year-old told the three lay Italian judges at the tiny courtroom in the Vatican City that he had started looking at child pornography online on Tumblr in July 2016 and exchanged pictures with other users.
The Vatican gendarmerie said more than 40 pornographic photos and videos, some showing sexual contact between adults and pre-pubescent children, were found on the priest's mobile phone.
The US State Department had told the Vatican last August that an embassy diplomat may have violated the law with child pornography pictures. The Vatican did not answer an official request to lift his diplomatic immunity, State Department sources said, and the priest was recalled to Rome last September. He was placed in custody in April after an inquiry had been opened.
Canada also issued an arrest warrant for Capella on suspicion of downloading child pornography from inside a church in the Ontario town of Windsor.
Faced with a growing number of cases worldwide and repeated criticism for the way the Catholic Church has handled the scandals, Pope Francis brought in new legislation in 2013 covering child sex abuse and pornography and sentences of up to 12 years for priests.
In one of the latest scandals, the Chilean church has been rocked by accusations of wide-scale covering up of child abuse during the 1980s and 1990s.
Last Wednesday it emerged that the former archbishop of Washington, Cardinal Theodore McCarrick, had been removed from the ministry following allegations he sexually abused a teenager nearly 50 years ago when he was a priest in New York.