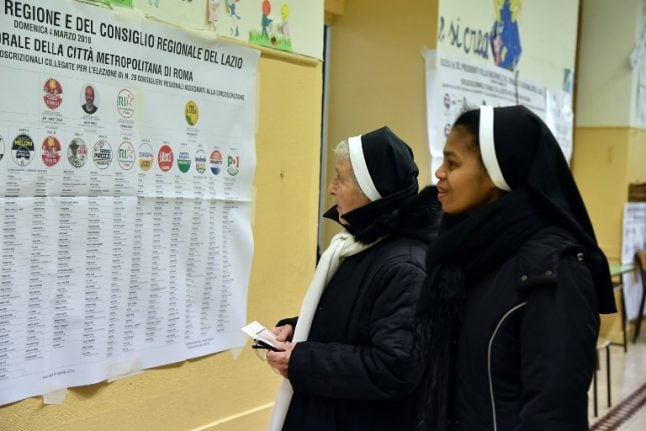 Nuns at a polling station in Rome during a general election in March. Photo: Tiziana Fabi/AFP

The Democratic Party (PD), the main party in Italy's centre-left coalition, was struck particularly hard in Tuscany, where it lost in traditional strongholds such as the cities of Pisa, Siena and Massa, which all voted in a centre-right or populist League mayor.

Even the town of Ivrea in Piedmont, north-western Italy, which has been a PD stronghold since World War II, voted for a centre-right mayor.

The town of Imola, famous as a Formula 1 venue, elected a Five Star Movement mayor; Imola had also been held by the centre-left since the end of World War II.

The centre left's defeat also spread to the south. The Five Star Movement (M5S) took the city of Avellino, in the region of Campania, from the PD.

In Sicily however there was a mixed bag of results. Siracusa was retained by the left, Ragusa voted in a Five Star mayor, while in Messina an independent candidate won.

Italy's largest daily Repubblica described the left's defeat in Pisa and Massa as “the collapse of the red fortress”. Tuscany and central Italy have always been bastions of support for the PD party, which has been crushed repeatedly in recent elections.

The average turnout was 47.6 per cent, reports Repubblica. Mayoral and council elections were held in 14 key regional municipalities across the country. The League and centre-right coalition won nine, the centre left four.

The PD's fall from grace in its Tuscan strongholds was unthinkable five years ago. In 2013, the PD controlled ten of 11 key municipalities in Tuscany; now it only holds three, with regional elections scheduled for Florence in 2019.