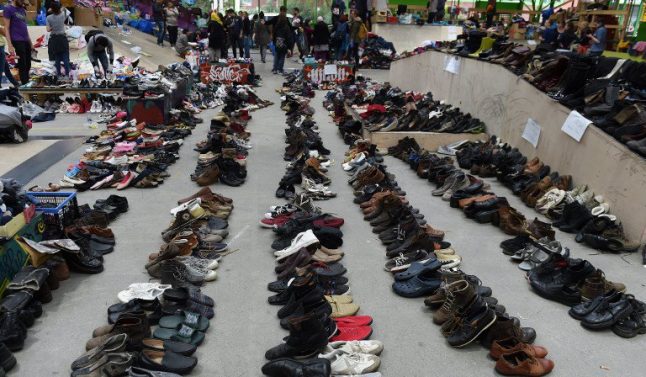 Shoes and cloth collected for migrants are laid out at a community center in Dortmund. File photo: Patrik Stollarz/AFP.

The EU's rules on asylum are dysfunctional, putting far too much strain on 'frontline states' such as Greece and Italy, most experts tell us. The so-called Dublin rules stipulate that asylum seekers have to apply for refugee status in the EU country in which they first arrive.

That should mean that the overwhelming majority of migrants apply for asylum in Greece or Italy, due to the fact that those countries are primary landing points for people crossing the Mediterranean.

France had the second-highest number of asylum seekers and refugees at 402,000, while in Italy the number was 355,000.

The numbers do not include people who have had their asylum requests rejected. At the end of 2016 an estimated half a million people who had been turned down for asylum were still living in Germany.

Figures published by the European Commission back up the claim that Germany is the country that deals with the largest weight of the asylum flow. While Germany made 524,185 asylum decisions last year, according to Eurostat data, Italy made 78,235 and Greece made 24,510.

According to German daily Die Welt, this all goes to show that Germany has rarely enforced the Dublin rules over recent years, instead allowing asylum seekers to make their application in Germany.

“This comparison does not in any way show that Italy and Greece are not burdened. These heavily indebted countries don’t have the means to handle the asylum flow like Germany. But the claim that Germany has left the coastal states on their own to handle the migration influx is simply wrong,” wrote Die Welt.