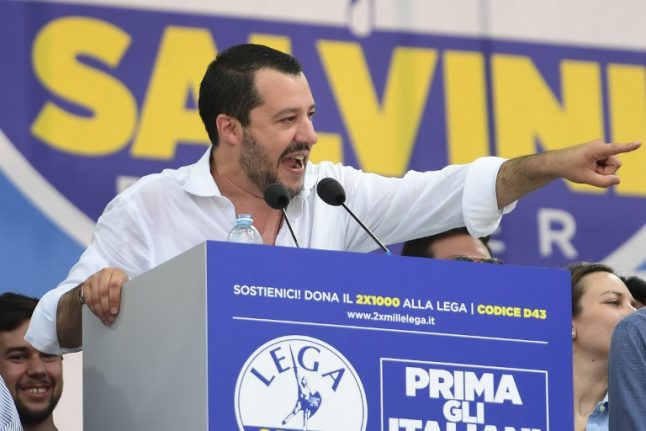 Italy’s Interior Minister and Deputy PM Matteo Salvini speaks during the annual meeting of Lega Nord (North League) in Pontida, northeast Milan, on Sunday. MIGUEL MEDINA / AFP
“I think of a league of Leagues in Europe, which unites all the free movements that want to defend their borders and the wellbeing of their children,” Salvini said to cheering crowds at his fifth party conference in the northern port of Pontida.
Salvini, who has forged alliances with other far-right European groups including France's National Rally, earlier said that next year's European Parliament elections will be a referendum on “a Europe without borders… and a Europe that protects its citizens”.
“I will tour capital cities, and not just European ones, to create an alternative to this Europe founded on exploitation… [and] mass immigration.”
Around 50,000 people came from all over Italy to attend his speech, local media reported, drawn by Salvini's “Italians first” rallying cry. Photo: Miguel Medina/AFP
'Most populist party in Europe'
“It's an indescribable feeling,” Salvini told the crowd, to hear the “calls of love coming from Pontida”. He had earlier told journalists that the League had cemented its place as the “most populist party” in Europe.
“The term is a compliment to me,” said the 45-year-old, clad in a blue T-shirt bearing his own portrait.
Eva, an activist at the rally from the northern city of Bergamo, said: “I hope Italy will finally understand that being part of the League is not folklore, it is a philosophy of life.”

Salvini, who is also co-deputy prime minister, has thrived with his hardline stance as the migrant issue has become central to the European Union's agenda.
He announced on Friday that Italian ports would be closed “all summer” to NGO ships which rescue migrants trying to cross the Mediterranean from Africa to Europe. “The NGOs will only see Italy on a postcard,” Salvini had quipped. Photo: Miguel Medina/AFP
“The decision to open or close ports is taken by the interior minister,” he said on Sunday. Anti-immigration hardliners accuse the rescuers of exacerbating the situation in the Mediterranean, where migrants try to cross the sea on rickety boats from North Africa.
The issue has once again exposed the rifts plaguing the European Union, as member states fight over how to handle the influx of people fleeing war, poverty and persecution.
On Friday, the bloc's 28 leaders hammered out a hard-fought agreement aimed at clamping down on immigration. However, divisions regarding its implementation remain and on Sunday German Chancellor Angela Merkel's own hardline interior minister Horst Seehofer rejected the deal, escalating a crisis that threatens to bring down her
governing coalition.
Seehofer, Salvini and Austria's interior minister Herbert Kickl formed an “axis of the willing” to combat illegal immigration in June.
'League's moment'
Italy's new anti-establishment government took power on June 1st, ending months of deadlock that saw the eurozone's third largest economy narrowly avoid snap elections after a last-gasp coalition deal.
Prime Minister Giuseppe Conte was sworn in at the head of the first far-right, populist government in an EU founding member, forged by the League and the anti-establishment Five Star Movement (M5S). Salvini's hardline charisma has all but eclipsed his co-deputy prime minister and M5S head, Luigi Di Maio.
“It's the League's moment,” the Corriere della Sera declared on Saturday.
The party's strength “depends above all on the continuity of Matteo Salvini's communication strategy in relation to the electoral campaign, a strategy based on a precise choice of sensitive topics in Europe, and also on his aggressive stance towards political leaders,” in particular President Emmanuel Macron of neighbouring France, the paper said.
READ ALSO:
Last weekend, Macron called for financial penalties to be levied against EU nations that refuse to accept migrants. The two men have also clashed over Rome's refusal to take in rescue boats with asylum-seekers.
Italy's tough stance comes despite the fact that arrivals have dipped by 96 percent since the peak of Europe's migration crisis in 2015. It has also sparked warnings that authoritarian movements will take advantage of any failure to tackle migration.
Salvini took the helm of the League in 2013, when it was a northern secessionist party on the brink of collapse with four percent of the popular vote. Since then, he has ridden a wave of public discontent, playing on anti-immigrant sentiment as he sought to shift the party's image from defender of the wealthy north against its “parasite” south, to that of guardian of Italy's national sovereignty.
His previous mocking of southern Italians has been largely forgotten and for Sunday's party conference there were people travelling up in their hundreds from Campania, Calabria and even Sicily.
READ ALSO: Matteo Salvini, Italy's rebranded nationalist sharing power with former enemy