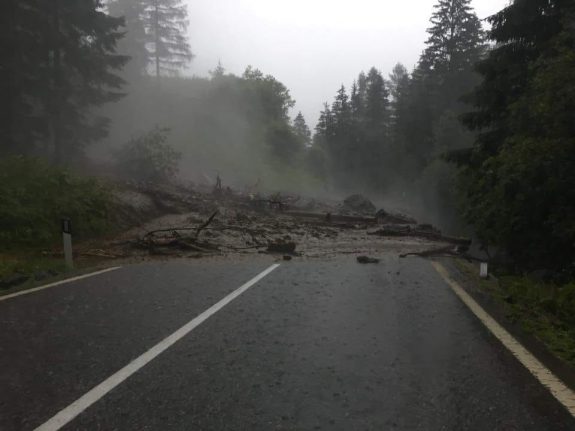 One man died when his car got caught in a flash flood near Turin. Guido Zabena, 51, drowned in an underpass on Monday night after driving in without realizing it had rapidly filled with water.

Since then the storms have swept east, triggering floods and landslides in Trentino-South Tyrol. Lightening struck the region more than 2,000 times in three hours on Tuesday.

Torrential downpours caused flash floods in the town of Moena, where some 50 people were evacuated from their homes as a tide of mud and debris swept through the streets.

In the city of Bolzano, which also saw unseasonal hail, the temperature plummeted from 32 to 20 degrees C in the space of an hour. In nearby Merano, winds were recorded blowing up to 77 kilometres an hour.

No one was reported hurt in South Tyrol, though firefighters were called out several times to deal with fallen trees and other debris.

The storms are expected to continue in the north-east on Wednesday and to spread to most of northern Italy on Thursday. The city of Milan has issued a yellow (moderate risk) weather alert as a precaution.

The rest of Italy will continue to sweat, however, with temperatures expected to climb over 30 degrees C in the next few days in Bologna, Florence, Rome and Bari, and as high as 35 in Florence and Bologna next week.