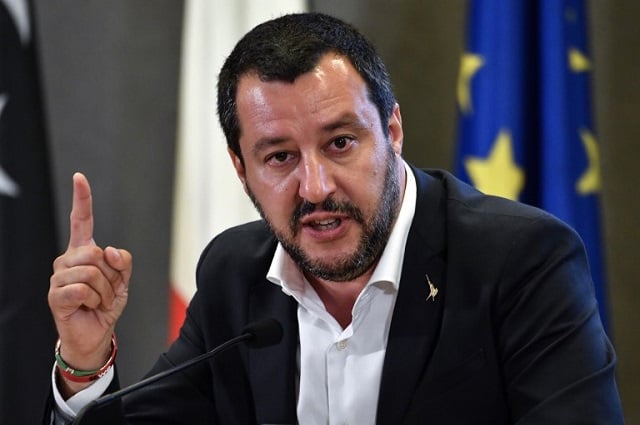 The aim is that “not one more person arrives by boat” on Italian shores, said Salvini during a news conference with Ahmed Maiteeq, vice president of the Libyan UN-backed Government of National Accord.

Salvini said that as “a minister and a father” he did not want any more “women or babies to get into rubber dinghies”.

“The goal is for those who come to Italy to arrive on planes, even first class,” said Salvini, who is the leader of the far-right League party which governs the country as part of a coalition.

Since taking up his post in early June Salvini has pushed the divisive issue of migration to the forefront of the EU agenda by refusing to open Italy's ports to migrant rescue ships operating in the Mediterranean. He accuses the NGO ships of aiding human traffickers to bring migrants to Europe.

“Since we made our position known, in recent hours there has not been a single ship of these so-called humanitarian associations in Libyan waters,” Salvini said.

“Pregnant women, children and refugees will remain in Italy,” said the minister, who has promised to speed up deportations of illegal immigrants. “Protection is reserved for humanitarian cases.”

Salvini has been at loggerheads with EU leaders over how to handle the influx of migrants trying to reach the continent, and reiterated that fellow EU member states must help Italy.

A wave of anti-migrant sentiment in the EU has seen countries such as Germany and Austria say they will tighten their border controls and propose sending back migrants to EU countries that previously registered them — often Italy.

“Before receiving a single asylum-seeker in Italy from another country, we want concrete, precise commitments, deadlines, costs, means on how the European Union will protect our external borders”, he said.

According to the International Organization for Migrants (IOM), 57,160 migrants have arrived in the European Union since the beginning of the year, 80 percent have landed on the Italian, Spanish or Greek coasts.