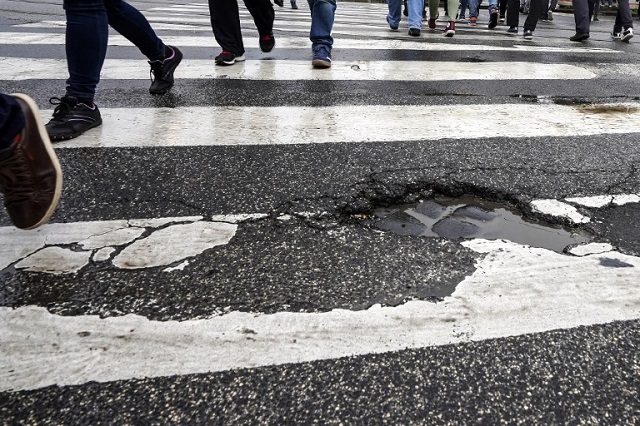 The 'basta buche' (enough holes) appeal was launched by mother Graziella Viviano, whose 26-year-old daughter died in a motorcycle accident Viviano says was caused by the poor road conditions.

On social media and in an open letter published in the Corriere della Sera, she called on people to use spray paint to draw attention to hazards such as potholes and tree roots — both to alert road users to potential dangers and to push city authorities to act.

Viviano sprays and marks with an 'E' the pothole which she says was responsible for her daughter Elena's death.

Since her appeal, dozens of images of people painting the potholes have been shared on social media.

The below image was shared on Facebook by Luciano Benedetti, who said he had previously fallen into the same pothole while on his own bike. “This yellow [paint] is not just an act of civility… it is the greatest testimony of love for any people travelling on two wheels,” Benedetti wrote.

In a Facebook Live video responding to locals' questions, Rome mayor Virginia Raggi said the city had finished mapping the roads, but that fixing the potholes would involve “often very long procedures”.

Rome police meanwhile have warned that the people who have painted potholes risk fines of up to €168 for vandalizing public streets, plus the cost of cleaning expenses. Rome has suffered from structural problems for years, due to natural cavities below the surface of its roads. An app set up to monitor road conditions reported that 10,000 potholes had appeared over the last seven years, with extreme weather ranging from snow and rain to high temperatures exacerbating the problem in the first half of this year.

In February a vast sinkhole opened near a construction site in north-western Rome, swallowing seven parked cars and forcing the evacuation of 22 nearby homes. Two people were placed under investigation for potential “culpable disaster”.

After that incident, Raggi announced a €17 million “Marshall Plan” to mend the city's streets. A prosecutors' investigation was also opened after consumer rights organization Codacons warned of “an avalanche of compensation cases against city authorities” due to the holes.

According to Codacons' data, one in ten vehicles in Rome has been damaged by the problem, and the organization called on any affected motorcyclists and drivers to contact them for help in claiming damages.

In May, the Giro d'Italia cycling race was cut short after participants raised concerns about safety issues posed by the potholes.