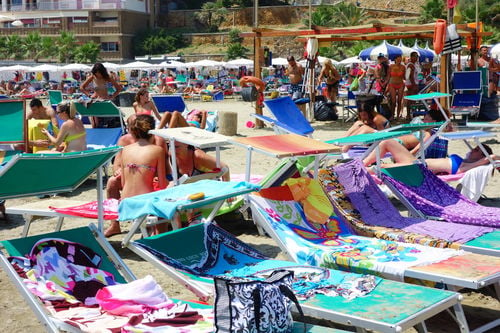 The islands of Sicily and Sardinia in the south are forecast to face the hottest temperatures, with residents of the Sicilian coastal city of Syracuse warned to prepare themselves for highs of close to 40C.

Mercury levels in the tourist centres of Florence and Rome are expected to rise to 37C and 34C respectively.

Bologna in the northeast is forecast to reach temperatures of 35C and Milan 32C.

High levels of humidity could make the heat feel up to two degrees hotter, meteorologists say.

Residents and tourists can thank an anticyclone that began in Africa and made its way over from the Algerian desert for the sizzling temperatures.

Meteorologists have dubbed the anticyclone Minos, after the mythical Greek king who in Dante’s Inferno has a snake-like tail and guards the gates of hell.

The heat is expected to slowly loosen its grip on the country throughout Sunday, and temperatures will gradually return to seasonally normal levels by Sunday evening.

Those in Italy’s northern Alpine and pre-Alpine areas of Liguria and Valpadana can expect showers and thunderstorms as the heat clears.

But Italian residents fearing an unbearably warm summer needn't worry too much, according to the Centro Meteo Italiano.

This year's August is forecast to be relatively mild compared to the excesses of the last few years, with rises in temperature expected to be tempered by cooling storms.