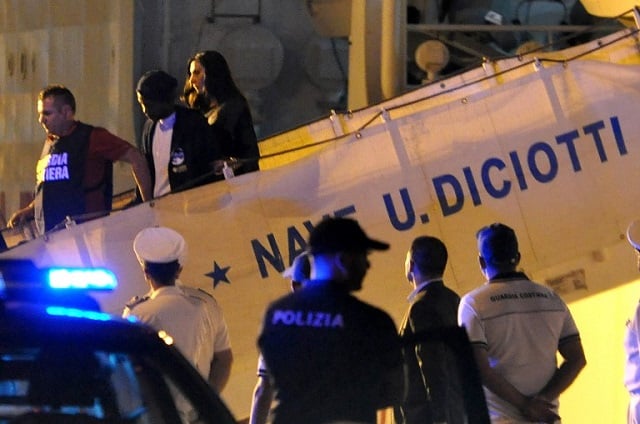 Police and coastguards escorted some of the migrants off the “Diciotti”, according to an AFP reporter at the scene, while Italian media showed them boarding black buses waiting for them on the quay.

The 67 migrants — including three women and six children — were earlier held at the port in Trapani as a row brewed over reports that a handful of the group revolted after they were rescued, amid fears that they would be returned to Libya.

Italy's Prime Minister Giuseppe Conte said earlier on Thursday night that they would be allowed off the boat once identification procedures had been achieved “in particular for those who may have committed a crime”.

Initially picked up by a supply vessel the “Vos Thalassa” over the weekend, the migrants were subsequently transferred to a coast guard ship after staff made emergency calls to authorities in Rome.

According to Italian media, sailors aboard the Vos Thalassa locked themselves in the control room and called for help after two migrants with mobile phones and GPS realized that the boat was heading south back towards Libya, sparking a furious reaction from some on board.

Migrants trying to reach Europe are desperate not to be returned to Libya where they face abuse and rape in detention centres.

The incident comes as tensions over migration rise in Europe, with 28 EU interior ministers meeting Thursday in the Austrian city of Innsbruck for a summit focused on finding a common migration plan. Italy's far-right Interior Minister Matteo Salvini — who has authority over the country's ports — initially refused to allow the Diciotti to dock, despite previously saying ports would remain open for Italian naval and coast guard ships carrying migrants.

“If there was violence (on board the Vos Thalassa), the perpetrators will go to prison and if there was no violence, because someone lied, then they (those who supposedly lied) will suffer the consequences,” Salvini — who is also the leader of the far-right League party — said on the sidelines of the Austria summit.

According to Italian media the standoff was resolved after a call in the afternoon from President Sergio Mattarella to Conte.

A group of charities, including Unicef and Save the Children, earlier issued a joint statement calling for the disembarkation of “refugees and migrants, including women and children, who have been at sea for four days”. Although the number of migrants fleeing war and poverty has fallen sharply since a 2015 peak, the issue remains deeply contentious in Europe, with the summit in Austria discussing tough new proposals but failing to reach a firm agreement.

Salvini, who wants to stop migrants arriving at Italian coasts, has banned charity rescue boats operating in the Mediterranean from docking in Italy, accusing them of aiding human traffickers to bring migrants to Europe.

The case of the Diciotti has also highlighted a split within Italy's coalition government, which includes the League and Luigi Di Maio's Five Star Movement whose left fringe is opposed to the closing of Italian ports.