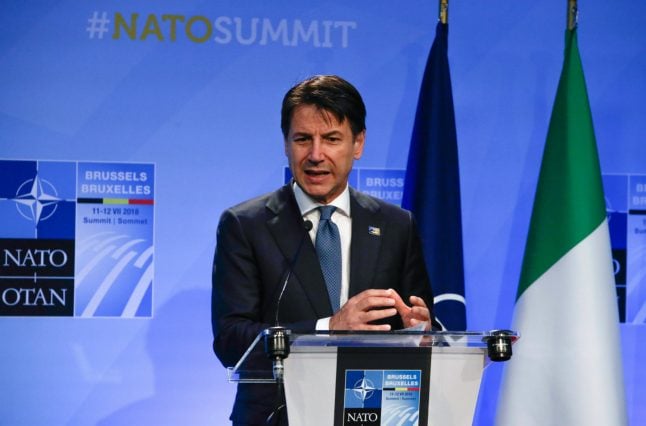 “France and Malta will respectively take 50 migrants each… other countries will follow very quickly,” Conte said on his Facebook page on Saturday.

A German government spokeswoman later said in a statement that “Germany and Italy have agreed that, in view of the ongoing talks on intensified bilateral cooperation on asylum policy, Germany is ready to take in 50 people”.

Italian Prime Minister Giuseppe Conte confirmed the deal on Sunday, writing on Facebook that 150 of the 450 migrants had now been accepted and the rest would soon be fairly distributed among other EU countries.

“This is the solidarity and responsibility we have always asked from Europe and now, after the results obtained at the last European Council, it is starting to become reality,” Conte said.

“Let's continue on this path with firmness and respect for human rights.”

Italy has since Saturday requested that its EU peers take some of the migrants stranded aboard the Frontex ships off the Italian coast.

Earlier, Italy and Malta had been at loggerheads again over whose responsibility it was to offer the 450 migrants on board the two EU Frontex vessels a safe harbour.

Conte said he had spent the day in contact with his 27 EU peers, reminding them that they had agreed at their end-June summit on the need to share the burden of dealing with the migrant influx.

In a letter addressed to European Commission head Jean-Claude Juncker and EU President Donald Tusk, Conte demanded others should help and not leave Italy in the lurch.

“In this context which always sees Italy in the frontline of saving lives at sea, I ask you for a clear sign on sharing the responsibility of managing the migrant issue and to envisage the possibility of a port taking in, or to take charge of some of the 450 migrants picked up,” he said.

There was no immediate confirmation from the French.

The migrants, like thousands of others, had set sail from Libya in a single wooden vessel which was identified early Friday while passing through waters under Malta's jurisdiction.

But Italy's far-right Interior Minister Matteo Salvini, who has authority over the country's ports, on Friday refused to let them dock in the latest demonstration of his no-go stance on accepting more migrants.

Salvini insisted instead that the two Frontex vessels be instructed to “head south, to Libya or Malta”.

“We need an act of justice, of respect and of courage to fight against these human traffickers and generate a European intervention,” he said in talks with Conte, according to reports carried by Italian news agencies.

Cited by the Italian media, cabinet sources said Conte was going to push for them to be immediately transferred to other European countries, otherwise they would not be allowed to land.

In an exchange of messages, emails and phone calls on Friday, Rome had pushed Valletta to take responsibility for those on board the wooden boat.

But Malta said the ship was much closer to the Italian island of Lampedusa, and on Saturday, insisted it had respected “all of its obligations under international conventions” concerning those rescued at sea.

On Saturday morning, as the two Frontex vessels approached the boat, several migrants threw themselves overboard, prompting immediate efforts to rescue them from the water, Italian sources said.

Eight women and children were taken to Lampedusa for medical treatment.

The latest standoff came just hours after 67 migrants were allowed to disembark from an Italian coast guard ship in Sicily late on Thursday.

Salvini, who took office when Italy's new populist government came to power on June 1st, wants to block any further migrant arrivals by boat and has banned NGO rescue ships from docking in Italian ports, accusing them of aiding human traffickers.

Last month, the French rescue ship Aquarius and the German boat Lifeline, who between them were carrying hundreds of migrants, were forced to divert to Spain and Malta respectively after Italy turned them away.

Italy, Greece and Spain have been on the front line of the migrant crisis, with Europe deeply divided over how to share the burden of the massive influx of people seeking a new life in Europe.

Separately, Spanish rescuers saved more than 340 migrants in the Mediterranean on Saturday.