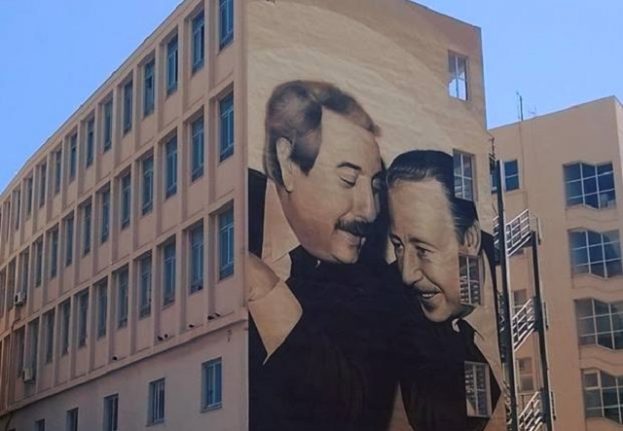 On July 19th, Italy marks the anniversary of the murder of one its most prominent anti-mafia heroes, Sicilian magistrate Paolo Borsellino, who was killed along with five members of his police escort by the Cosa Nostra organized crime group on this day in 1992.

Borsellino has become known worldwide as one of the most important figures in Italy's fight against the mafia and his death spurred campaigners on in the effort to bring the groups to justice.

He and his colleague Giovanni Falcone, who was killed by a car bomb two months earlier, have become a symbol of anti-mafia efforts and their faces often adorn posters used in protest marches.

Both were part of Sicily's Antimafia Pool, a group of magistrates set up to investigate Sicily's mafia to share information and prevent any one investigator becoming the sole target of the group.

The pair had also grown up together in the same neighbourhood, and Falcone recalled how they played ping pong and football games as boys – sometimes against classmates who would grow up to become infamous members of mafia clans.

ANALYSIS: Citrus fruits, scurvy and Cosa Nostra: the origins of the Sicilian mafia

The mafia regularly threatened, attacked and killed magistrates, and the members of the Antimafia Pool lived under constant police surveillance for their own protection.

On July 19th 1992, a Sunday, Borsellino began the day with his family at their summer house outside Palermo. After having lunch, the magistrate was driven to Palermo's Via D'Amelio to meet his mother, escorted by two police cars.

At 4.58 p.m. on Sunday 19 July 1992, Paolo Borsellino gets out of his car in via D'Amelio, accompanied by police protection officers Agostino Catalano, Walter Eddie Cosina, Vincenzo Li Muli, Emanuela Loi & Claudio Traina and calls his mother on the entryphone of her building>>162

Outside his mother's house on the now infamous Via d'Amelio, a parked Fiat had been loaded with TNT. It exploded when Borsellino arrived.

The magistrate was killed along with five of the six police officers working to protect him that day: Emanuela Loi, Agostino Catalano, Vincenzo Li Muli, Walter Eddie Cosina and Claudio Traina

Antonino Vullo, the sixth member of the escort, survived thanks to the fact he was parking a car at the time of the explosion.

The scene after the explosion is one of complete chaos. Police, Carabinieri, Fire Brigade & Ambulance service vehicles & personnel rush to the scene. Perhaps, other more sinister figures from the Secret Services were also present >> 164https://t.co/aJaWGQHnlW

Borsellino was offered a state funeral, but his widow Agnese refused to accept it – she accused the government at the time of failing to protect her husband.

She asked that no politicians attend the private funeral, and thousands of members of the public protested at Palermo's prefecture over the magistrate's death. Both before and since his death, Borsellino was widely praised for his work, including by the UN's anti-crime chief speaking on the 20th anniversary of the Via d'Amelio bomb.

Italy's politicians paid tribute to Borsellino, with Italian President Sergio Mattarella – a Sicilian who entered politics after his brother was murdered by the Cosa Nostra – said Borsellino's work “constituted milestones in the fight against the mafia in Sicily”.

Questions remain over the murder today, including the disappearance of the book the magistrate was writing, known as the Red Agenda, from the crime scene.

The investigation has also been hampered by unreliable testimonies from ex-mafiosi.

In an open letter published by Repubblica in 2018, Borsellino's daughter Fiammetta posed 13 questions about her father's death, including the question of his book and why his police protection was not increased following similar killings.

The Cosa Nostra first appeared in Sicily in the 1870s and soon infiltrated Italy's economic and political spheres. It has been linked to vote-buying and intimidation cases, especially at a local level, and in 2018 the country's Interior Minister warned there was a “concrete risk” of mafia meddling in the general election.

In 2017, the Cosa Nostra's so-called 'boss of bosses' Toto Riina — who ordered the killing of Falcone and Borsellino — died in prison.

The Italian parliament's anti-mafia commission warned that this “paradoxically” strengthened Italy's mafia by allowing a successor to take over. This was not possible while Riina was alive due to the clan's internal hierarchies, but his efforts to direct the criminal group were hindered by his imprisonment.

Meanwhile, Italian anti-mafia experts have warned that the groups are becoming increasingly powerful abroad – with some saying the mafia is now a bigger international security threat than terrorism.

Mafia groups are also set to profit from the coronavirus crisis and its devastating impact on the Italian economy.

A version of this article was first published in 2018