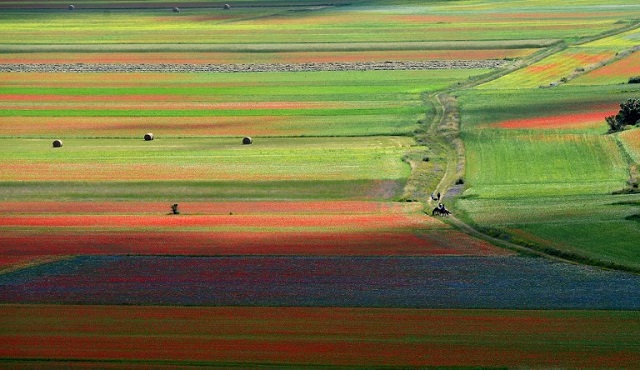 Poppies, daffodils, violets and others paint the fields in rainbow hues, and thousands of tourists flock to take in the sight in the Apennine's highest village. La fiorita takes place in the summer months between late May and July. This year it began towards the end of the usual period, in late June, but the colours are particularly vivid thanks to favourable weather conditions. Castelluccio is well-known in Italy and among chefs worldwide for the lentils that grow in these fields, which have Protected Geographical Indication (IGP) meaning they sell for a higher price due to the origin and quality. The town's lentils sell at around €12 per kilo. Since the 2016 earthquakes, the annual 'flowering' has taken on a deeper meaning. The town was badly hit by the series of tremors, and the bright colours ahead of the September harvest are an important symbol of Castelluccio coming to life again.

But the town has not yet fully recovered, and some of the roads leading to it are still not even fully re-opened. Residents of Castelluccio meanwhile are waiting for their quake-damaged houses to be restored. This week, five businesses and two dairies re-opened for the first time since the earthquake.

A year and a half from the earthquakes, the vice-president of the Umbria region said it was a “historic and important day” for the whole area.