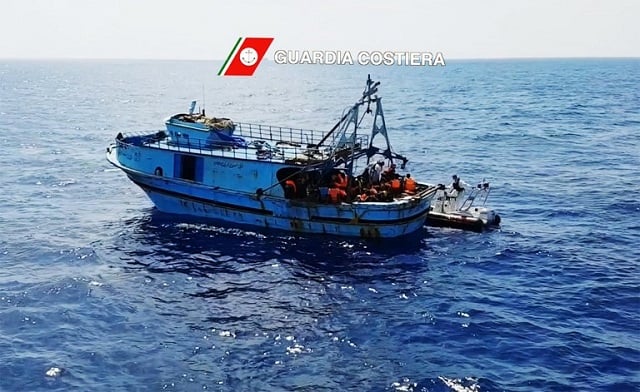 Over the last decade the coastguard has coordinated the rescue of hundreds of thousands of migrants off the coast of Libya, in many cases pulling them from the water themselves in treacherous conditions.

But as of June, they have been ordered to transfer calls for help and reports of boats in distress to the Libyan capital Tripoli.

Now — despite a culture of traditionally not criticizing government policy — a handful of coastguard staff have spoken out.

Speaking on condition of anonymity, the admiral recalled that the Italian justice system had deemed Libya was not a “safe place” for rescued people to returned to. Many migrants trying to reach Europe are desperate not to go back to Libya as they potentially face abuse and rape in detention centres.

The admiral also denounced the absence of an official decree or act regarding the decision to close the country's ports to vessels carrying migrants. In recent weeks the policy has left the coastguard powerless as several ships with rescued migrants aboard spent days stranded in the Mediterranean unable to dock in Italy. On Wednesday, at an event marking the 153rd anniversary of the Italian Coastguard, admiral Giovanni Pettorino, coastguard commander, evoked the memory of Salvatore Todaro, a submariner who during WW2 took serious risks to rescue the survivors of a ship he had just sunk.

“In times of war, these things are not done,” a German admiral is said to have told Todaro at the time.

The coastguard commander concluded his speech given before Italy's new political authorities, by recalling Todaro's response: “We are Italian sailors. We have 2000 years of civility behind us and we do these things.”

Speaking anonymously to Catholic daily Avvenire and Radio Radicale, some coastguard officers said the priority to rescue those in danger was demonstrated earlier this month. On July 13th the coastguard was sent to keep watch on 450 migrants crammed into a fishing boat, but took part in a later rescue mission even though Rome had told them to let Malta take charge, the officers said.

Recalling the decision to intervene, the officers spoke of their “feeling of helplessness” which had built up in the weeks prior, as migrants attempted the perilous sea crossing.

The vast majority of Italy's around 13,000 coastguard officers work along the country's 8,000 km of coastline, but the institution says that more than 2,000 of them have had first-hand experience on vessels operating off Libya — where a large number of the migrant tragedies occur.

“At the moment, the atmosphere among the coastguard corps is not the best,” says Sergio Scandura, a journalist with Radio Radicale.

READ ALSO: Veteran Italian seaman speaks out about his experience of the migrant crisis

The month of June was the deadliest in the Mediterranean in recent years with the International Organization for Migration (IOM) reporting some 564 deaths or disappearances, despite the fact that overall departures have dropped sharply since the summer of 2017.

Salvini's hardline immigration stance appears, however, to be very popular among Italians: according to about half a dozen separate polls, some two-thirds of citizens approve his decision to close ports to rescued migrants.

His far-right League party — which governs the country as part of a coalition — has also experienced a boom in the polls: the League garnered 17 percent of the vote at the March general election, but opinion polls now suggest support of around 30 percent.

The new policy has come under fire from the country's opposition politicians, however, and some of Italy's prominent Catholic figures have also spoken out.

After two bodies were discovered in a deflated dinghy off Libya, along with one survivor suffering from shock and hypothermia on Tuesday, the Episcopal Conference of Italy released a statement denouncing a “tragedy which we cannot manage to get used to”.

“We warn unequivocally that to save our humanity from vulgarity and barbarism, we must protect life. Every life. From the most exposed, humiliated and trampled,” the bishops wrote.