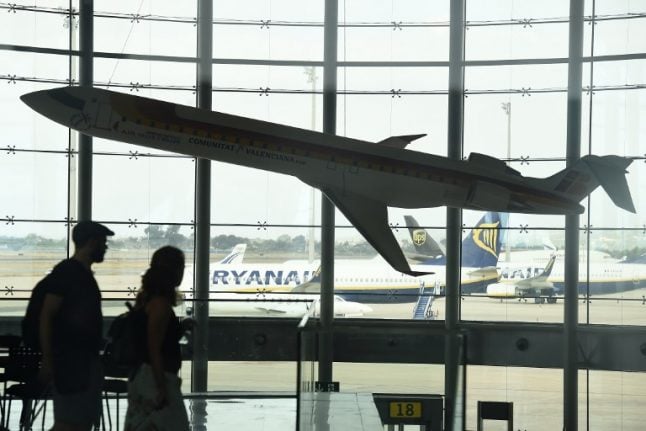 Passengers waiting to board a Ryanair flight in Spain. Photo: Jose Jordan/AFP

The Irish low-cost airline said last week that strike action, called by five unions over pay and working conditions, would also force it to cancel a further 300 flights on Thursday.

It said some 100,000 passengers are affected so far, and that they have either been put on alternative flights or have applied for full refunds.

While the cancellations are causing travel chaos around Europe, the worst affected country is Spain, where about 1,800 workers have gone on strike.

Ryanair has apologised in a tweet to its customers in Belgium, Spain and Portugal affected by cancellations.

Italy was not mentioned, despite a third of today's cancelled flights affecting those travelling to or from the country.

A total of 132 Ryanair flights in Italy were cancelled today, Rai reports, and many others were delayed. Angry passengers have been taking to Twitter to complain.

Some passengers in Italy said they were only told of cancellations once they had arrived at the airport, often after facing long delays.

This was this morning. I mean 2 hours delayed and then they cancelled my flight. @Ryanair pic.twitter.com/SEtb2xYmoK

At Bologna’s Marconi airport there have been crowds and long queues at check-in desks since early this morning. There, 18 Ryanair flights to and from London, Malta and Ibiza have been cancelled.

Founded 33 years ago in Dublin, Ryanair is famous for its low fares. But employees have long complained of poor pay and working conditions.

The latest strike action came after a last-minute meeting between union representatives and Ryanair bosses failed to produce an agreement.

Unions say they want the airline to give contracted staff the same working conditions as its own employees, and are calling for improved sick pay and a “fair living wage”.

They also ask that Ryanair staff be employed under the national legislation of the country they work in, rather than that of Ireland as is currently the case.

Ryanair argues that since its planes fly under the Irish flag and most of its employees work on board planes, its staff are covered by Irish law.

The company defends the package it offers staff, saying they can earn up to 40,000 euros per year.

This strike by cabin crew comes after Ryanair was hit on Tuesday with a third day of strikes by its pilots in Ireland over pay and conditions, resulting in the cancellation of 16 flights and affecting 2,500 passengers.